Posted on 7 October 2022 by Harry Stevenson

Team Accelerate runner and Steel City Strider Dot Kesterton has recently raced in the Bristol 10K road race organised by the England Masters Athletic Keep reading to hear how she got on. Stuck out on Higgar, can’t get back in time.

Forgot to fill in the entry form.

I didn’t tell the family I’d be away.

It’s the hour before the alarm goes off and all the anxiety half dreams are swirling crazily around. A dozen reasons why I won’t make the start line. With emerging consciousness comes a breath of relief. I’m in the right place at the right time with the right kit, well prepared and have done my homework as thoroughly as I can. Despite the nerves I’m looking forward to it.

Bristol, a bit hilly like home and made rich on the back of slavery sits in late summer sunshine with a breeze off the sea as I walk to the start. I do wish the ‘England’ on my vest sat as comfortably as the ‘Wales’ on the other home international athletes, proud of their heritage. There are times when I’m simply ashamed to belong to a small island nation with small, minded leaders.

The race was organised by England Masters Athletics. The qualifier was Leeds Abbey Dash last October so here I am 11 months later in my new V70 age group to pound city centre streets in search of a new title. The route, snake like in the route map, winds around the Avon, through a small park, over unfriendly cobbles and finishes in Millennium Square, a large pedestrian area overlooking Spike Island and the river. Around 240 England Masters 35+ years old were at the head of a large group of runners looking forward to the Great Bristol 10k.

Tim Rafferty, fellow Sheffielder warming up for the half marathon after the 10k calls a greeting. it’s so good to see a familiar face among a sea of strangers.

My race goes well in that I find my pace in the early stages and settle to around 4.40mins per k. That should bring me in among the leaders without blowing up. Breathing is manageable and my legs are strong. Through the 5k point at 23.22 minutes so if I can hold onto it, I’ll be in around 47 minutes. It would be good to magic up a sprint finish but that eludes me, so I stumble in breathing hard in 47.30 chip time. At that stage I don’t know if I’m leading the age group or not, so it comes as a great relief to learn that I’ve led the group from the outset. Friend and rival, Anne Dockery, a formidable duathlete is next in around 50 minutes with the remaining V70’s a little after.

We relax and chat over the post-race presentations as people from far and near celebrate their achievements. The Masters winner was Matthew Rees, M35 in 31.33. First woman was Helen Gaunt, W40 in 35.41. Full results can be found at Here>>

Team Accelerate runner Dot Kesterson has been busy racing and training throughout 2021. Keep reading to find out how she got on and plans to move forward and up her game for 2022. 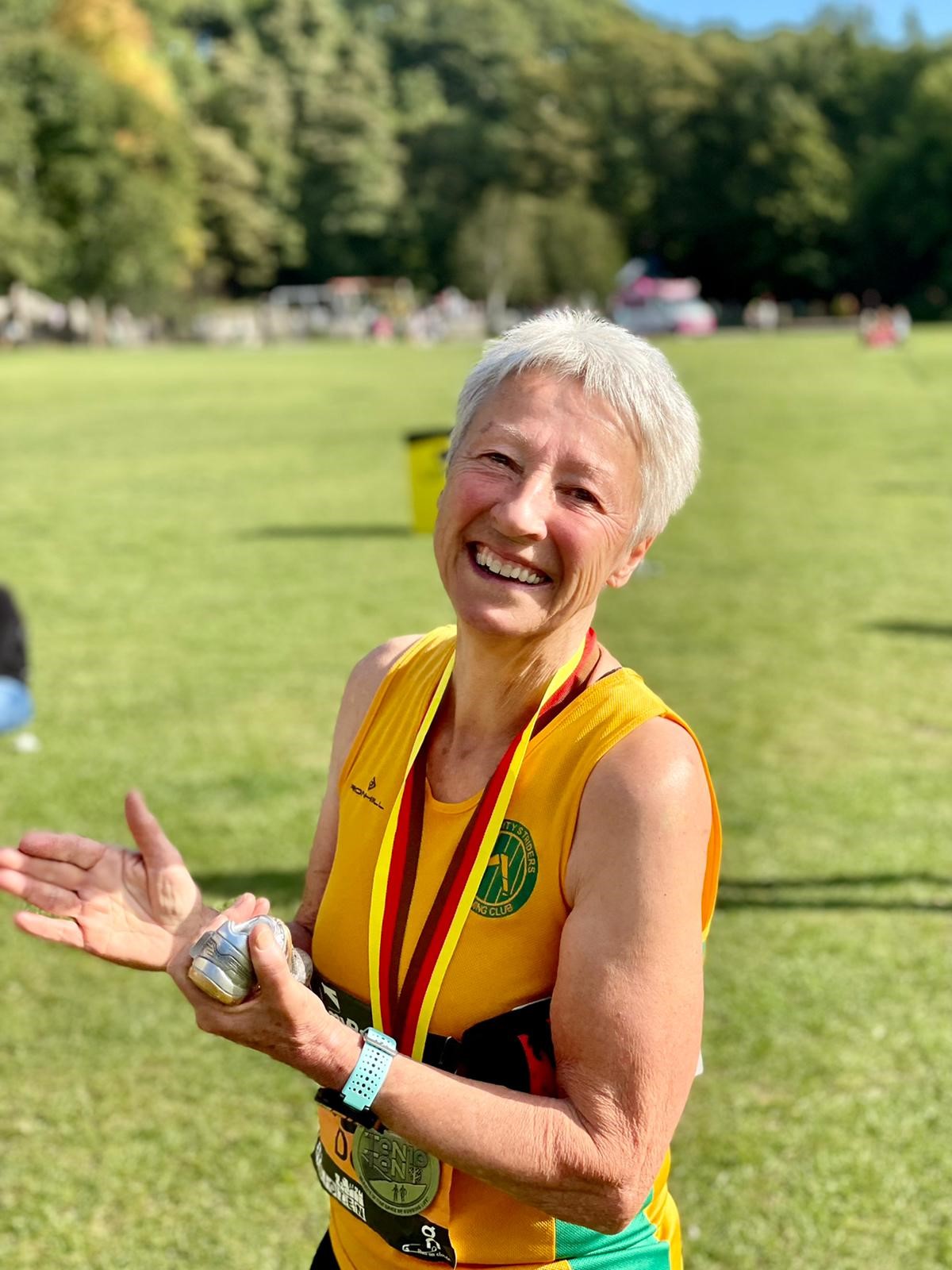 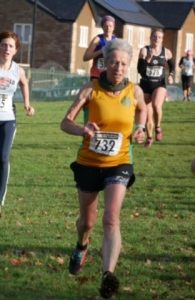 This is my last year in the F65 age group. Coach John Rothwell and I agreed it could be a time to enjoy running for its own sake before beginning more focused work for the next age group in 2022.

The first half of the year followed the same pattern as much of 2020 with a solitary run program punctuated with virtual races of different distances and terrains from 1500m to half marathon. I used the time well to increase my long runs as planned. Speed and interval work suffered because of a lack of opportunity to run against others.

The first race with other competitors was the Steel City Striders inspired Rother Valley relays, 23rd June. Teams of 3 runners x 5K. After 15 months since any races with actual people, it was both exciting and daunting. As an F50 competitor with Kate Morris and Kate Scott, the pressure to perform well was as keen as any race. We each ran well to win the category, though it was clear my 5K time at 23:20mins was around a minute slower than before lockdown a year earlier.

Attending the England Athletics Representation 10K race in Kew Gardens gave me a chance to wear my England vest, last worn in Birmingham in May 2019. I had no expectation of winning the age group since I was six months from the end of it but trained and prepared according to my goals and was delighted to win the gold with a relatively slow 47:34mins, 93.03%AG, just four seconds ahead of my nearest rival. An autumn series of 10K races finished with Percy Pud in December. 10K times were regularly around 47-48 minutes so a time of 46:16mins, 95.64%AG was very pleasing.

With the resumption of Parkrun in 2021, I have used the opportunity to work on my 5K and 10K pacing. 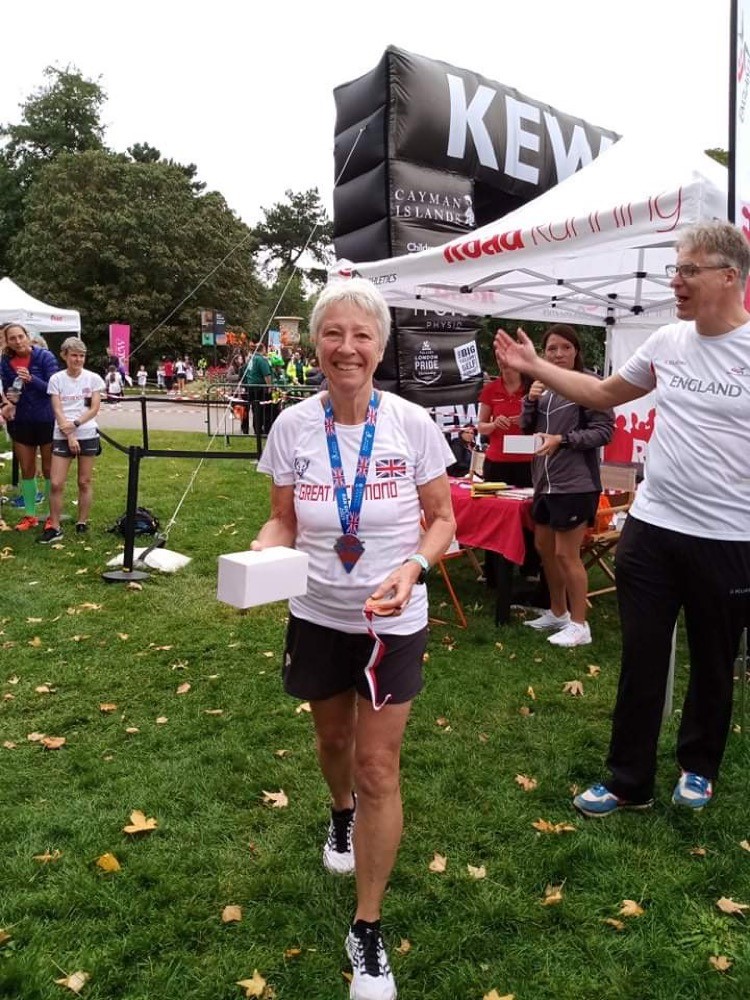 My main goal for the year is to attend the World Masters Track and Field Championships in Tampere, Finland in July. The pandemic is still rife with the Omicron variant affecting fixtures but if the WMA fixture goes ahead, I will enter the 10K road race and Cross Country. I will be 70 in April and will compete against a new group of women at an international level. To achieve success at Tampere I will

Train well over the next six months

Raise weekly mileage over the winter up to 50K

Focus on recovery including active recovery

Attend two-speed sessions per week except in recovery weeks.

There will be an England Home International race in Bristol, but no date had been confirmed yet.

I will enter other races as the opportunities arise, all as part of my build up to WMA 2022.

Accelerate-Scott Team member Harvey has been lucky enough to get his hands on a pair of the new Scott Supertrac 2’s and over the last month has been putting them through their paces. Keep reading to hear what he has to think about this iconic shoe from Scott.

When I initially heard Scott were updating the Supertrac i was very sceptical as they have easily been my favourite trail and fell shoe for the whole 2019. Weather it was racing or training, short or long it worked for it all. Thankfully Scott follow along the lines of if it ain’t broke don’t fix it. And wow, I think they nailed it. Everything I loved about the Supertrac 1 has remained with some very subtle tweaks to push it to the next level.

Straight out the box and I knew that they hadn’t changed too much. The main changes are an update to the outsole and a redesigned upper and lacing system.

Redesigned – The Upper
The biggest and most prominent change has to be the update to the upper, it now uses Schoeller’s Coldback fabric for better breathability, heat protection and increased comfort. Something I found with the Supertrac 1 was that the upper always felt a little tough and restrictive. Now however the Scheoller fabric hugs your foot allowing it to move but still maintaining a lock down feel you can trust. This could also be due to the update on the lacing, with an extra eyelet to help when using a runners loop to further lockdown your foot. Perfect for those steep technical descents where you need to be able to trust in your shoes. In terms of longevity with the new material, I have done just over 100 miles in mine and they aren’t showing any signs of wear. 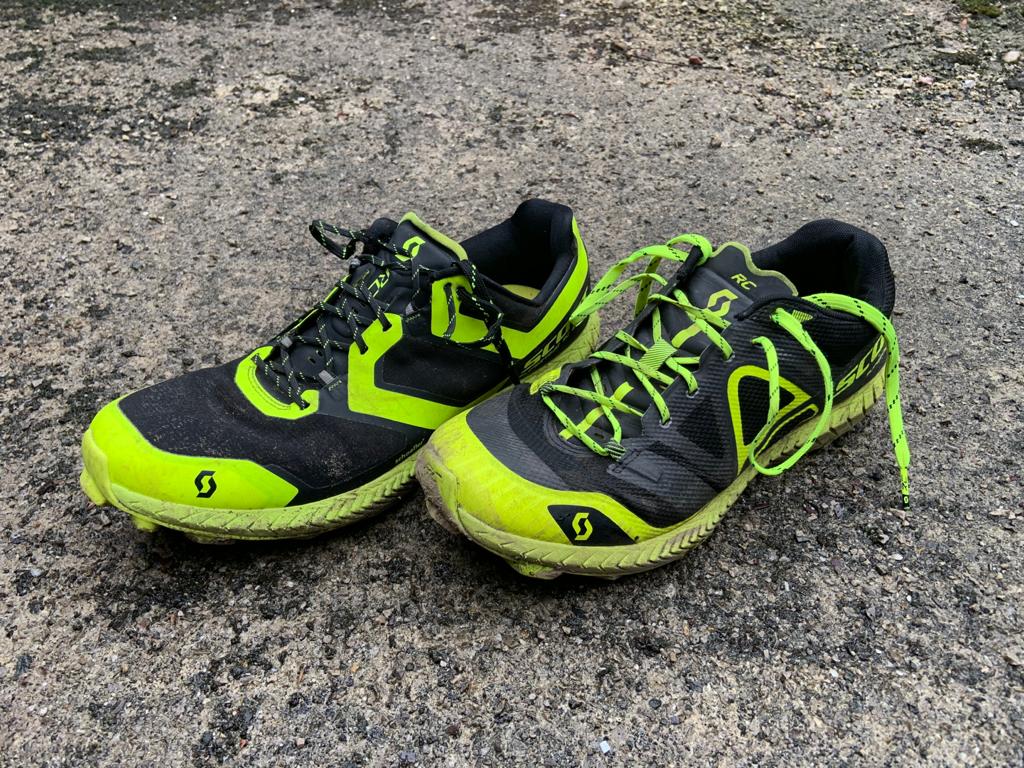 The Outsole
The next change you can see is to the pattern of the outsole. The lugs have been spread out to help reduce the amount of mud that can get stuck in them without losing traction. When you are running this isn’t something you are likely to notice straight away. It certainly doesn’t hold them back. I have taken them on some pretty rough descents and not once did it slip or give me any reason not to trust them completely. Weather it was wet rock, deep mud or long grass they just didn’t budge. Just what you want from a trail shoe that can easily cope with a little open ground and fell.

The Midsole
The finally change they made is to the feel of the midsole, it is, to me, feeling a touch softer than its predecessor. This is due to the grooves which have been added to the midfoot area of the outsole allowing more flexibility throughout the shoe. For me this is no bad thing and I know of a few people saying the 1 was a little to firm at times. With this slight change it makes them feel even more lively when you hit a hard packed trail or road section. They continue to feel responsive, with the advantage of also feeling more nimble through more rugged terrain.

After 100 miles, they are showing hardly any signs of wear, very true to scott.

This is definitely an upgrade for the Supertrac while keeping most of the features that made them the shoes people love. If you liked the 1 then the upgrade is worth a look or if you are after a new pair of trail or fell shoes then these could be a big contender for you. 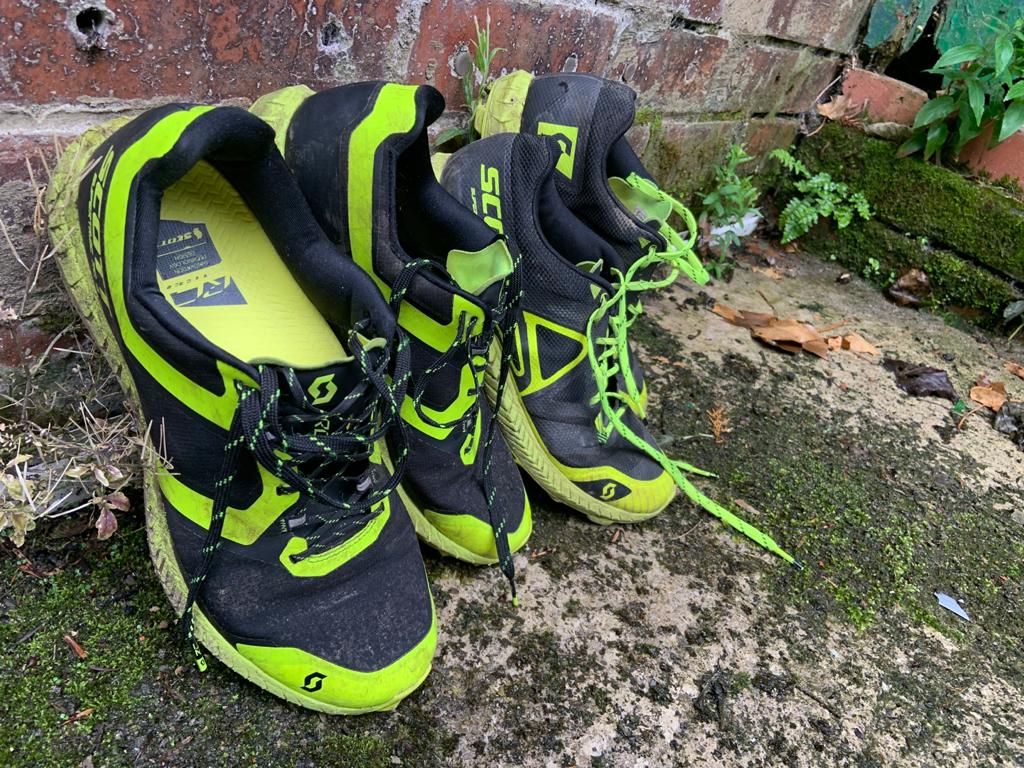 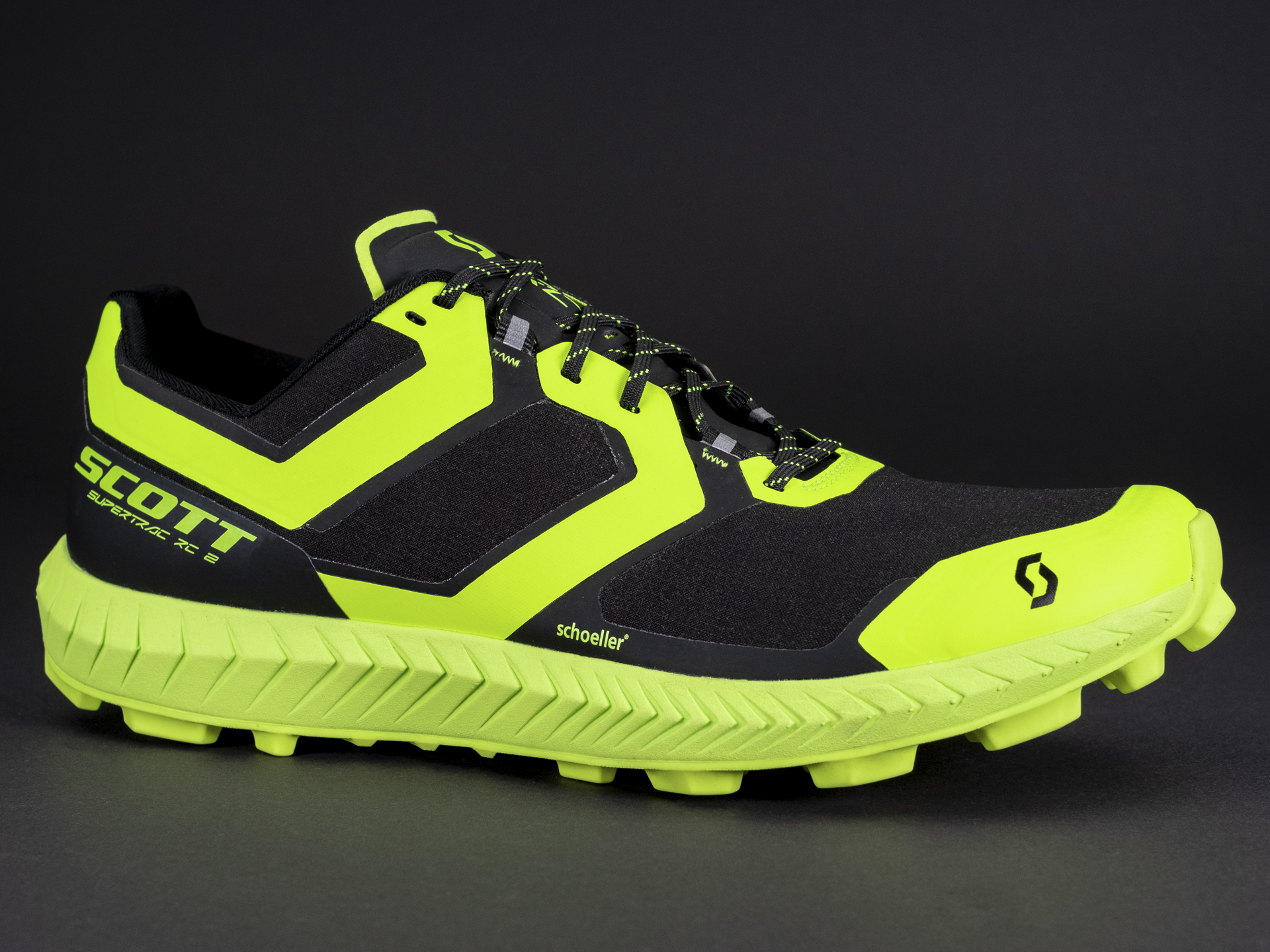