Norman Walsh began making athletics footwear upon leaving school in 1945 at the age of fourteen. His name became known by many top professional athletes around the world and in 1961 he founded Norman Walsh Footwear, occupying part of his father’s shoe repair shop. 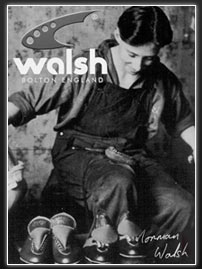 It is estimated that Norman’s family have been involved in footwear since the late 1800’s. His father made and repaired clogs for the local mill workers. Initially Norman worked alone, sometimes up to 80 hours a week in order to deal with the high demand for his footwear.

Norman Walsh footwear has continued to grow steadily. The brand is now recognised within the exclusive designer footwear market and is receiving excellent success in Europe and the Far East, with products being placed in exclusive retailers. In addition we are recognised as the leading brand in the UK for off road performance and hill running footwear. The company has invested in worldwide trademark registration of its brand and is the last true British Athletic Footwear Company.