I'm testing the latest trail shoes from Hoka.  I'm also recceing a race route for future reference.  I'm following a rough map on my phone.  It's actually a screenshot of somebody else's recce.  There's a mixture of grass, stoney trails, gravel tracks, mud, wet grass, road and cinder path.  On my feet are the Speed Instinct, a 3mm drop trail shoe with 19mm forefoot depth and 22mm in the heel. 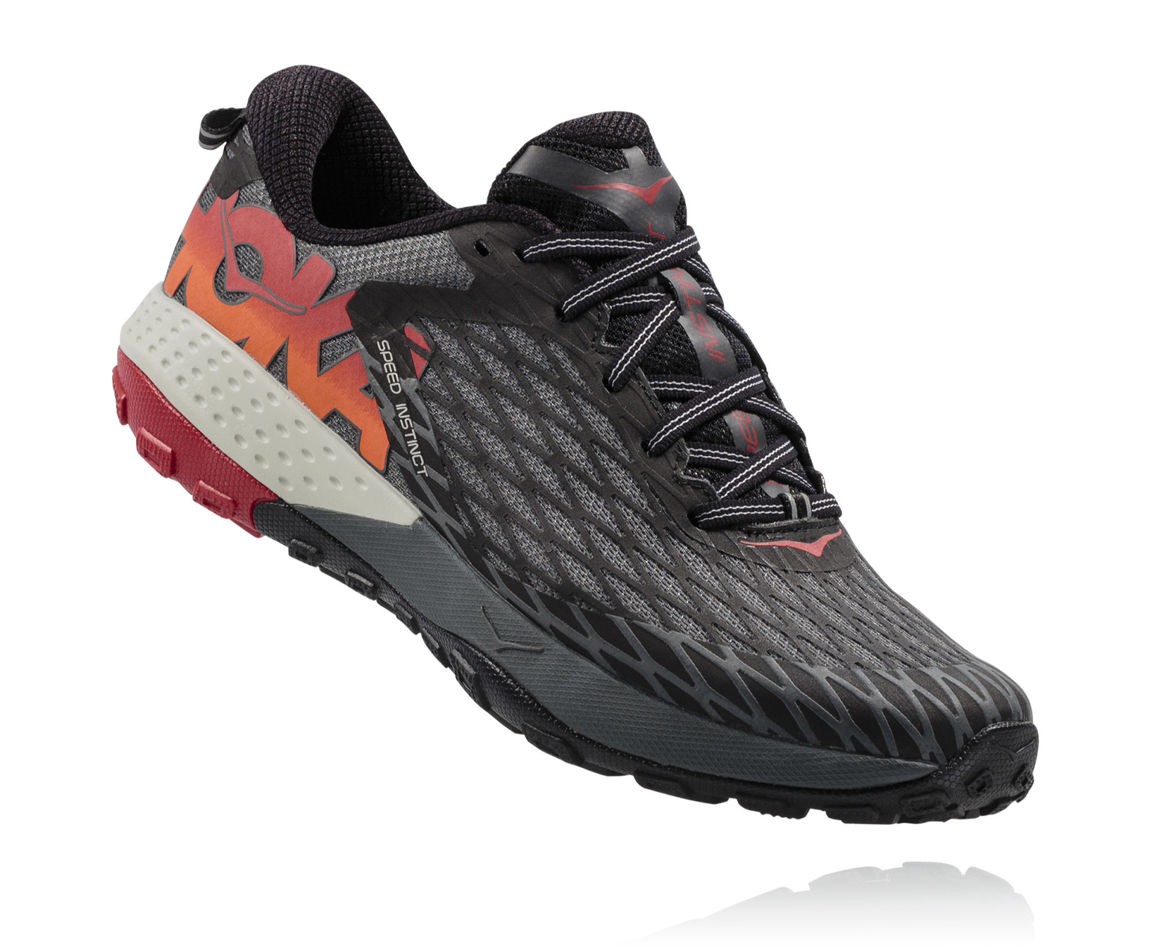 By design, it's deep.  That's Hoka's 'thing'.  The 3mm off-set creates a feeling of natural freedom of movement and they're definitely lightweight at 225g, but there are lighter shoes out there for sure.  The benefit of that depth becomes clear as soon as you're on the move however.

I like to feel the ground through my shoes, but to be honest, sometimes when you're covering a mixture of terrain and in for a few lumps and bumps - the cushioning smooths it out.  Protects.

The low drop (difference between height at heel and toe) lets you move naturally.  I run on my midfoot and enjoyed the ability to use this shoe effectively over technical, rugged surfaces.  From one feature to another, I could leap and rebound quite speedily.  I skipped around puddles and was able to change my footing quickly to take higher or lower trods on some of the more weather beaten sections.

A surprisingly nimble little shoe.  The outsole's forefoot is comprised of a grippy tread pattern, multi-directional lugs and a good surface area for use on hard baked paths, road or rock.  The studs are equally at home when it gets wet, with space between them and some bite when pressed into grass or damp mud. 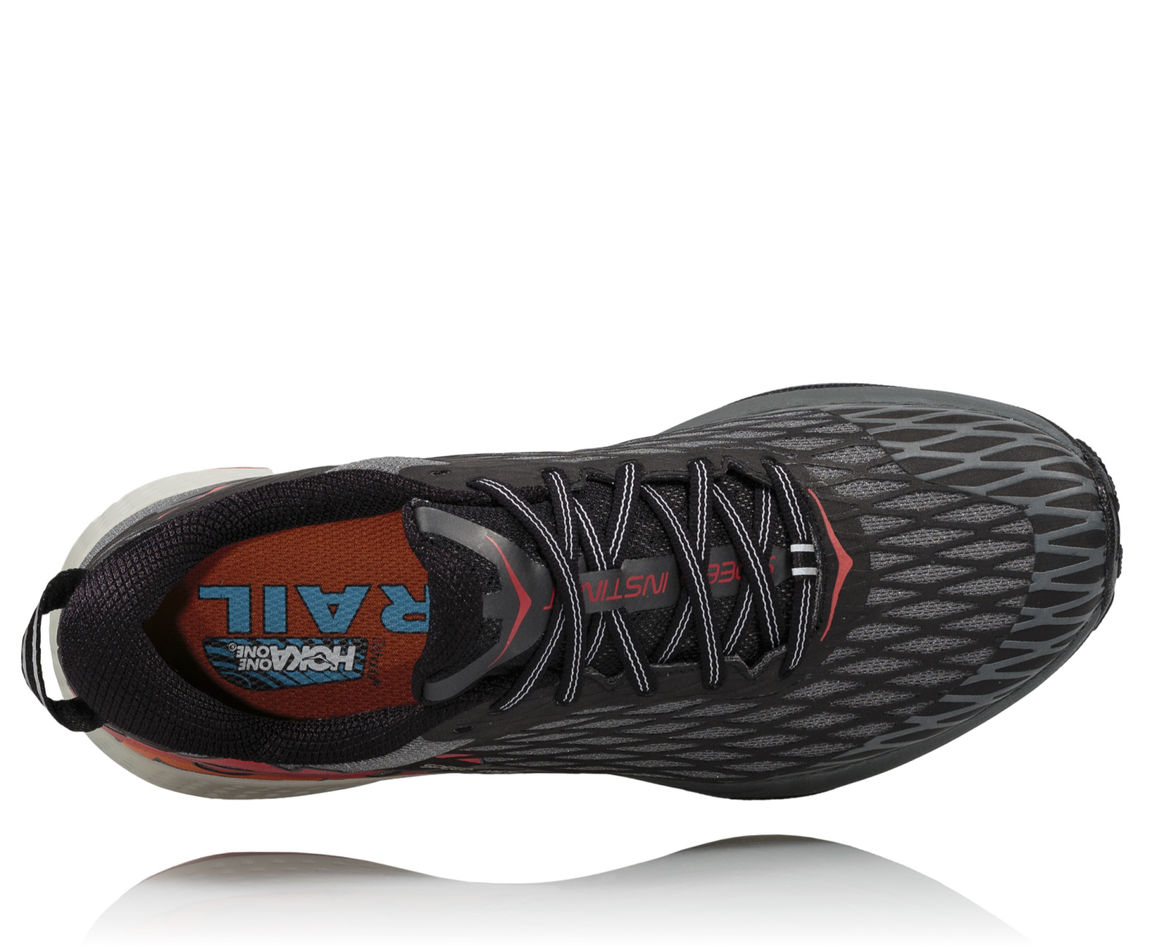 The fit seems perfect on this occasion.  Freedom of movement, but a firm hold on my feet.  Stability with plenty of comfort.  The lacing offers a secure lock and the laces themselves don't appear to come loose.  Simple things, but important for sure. 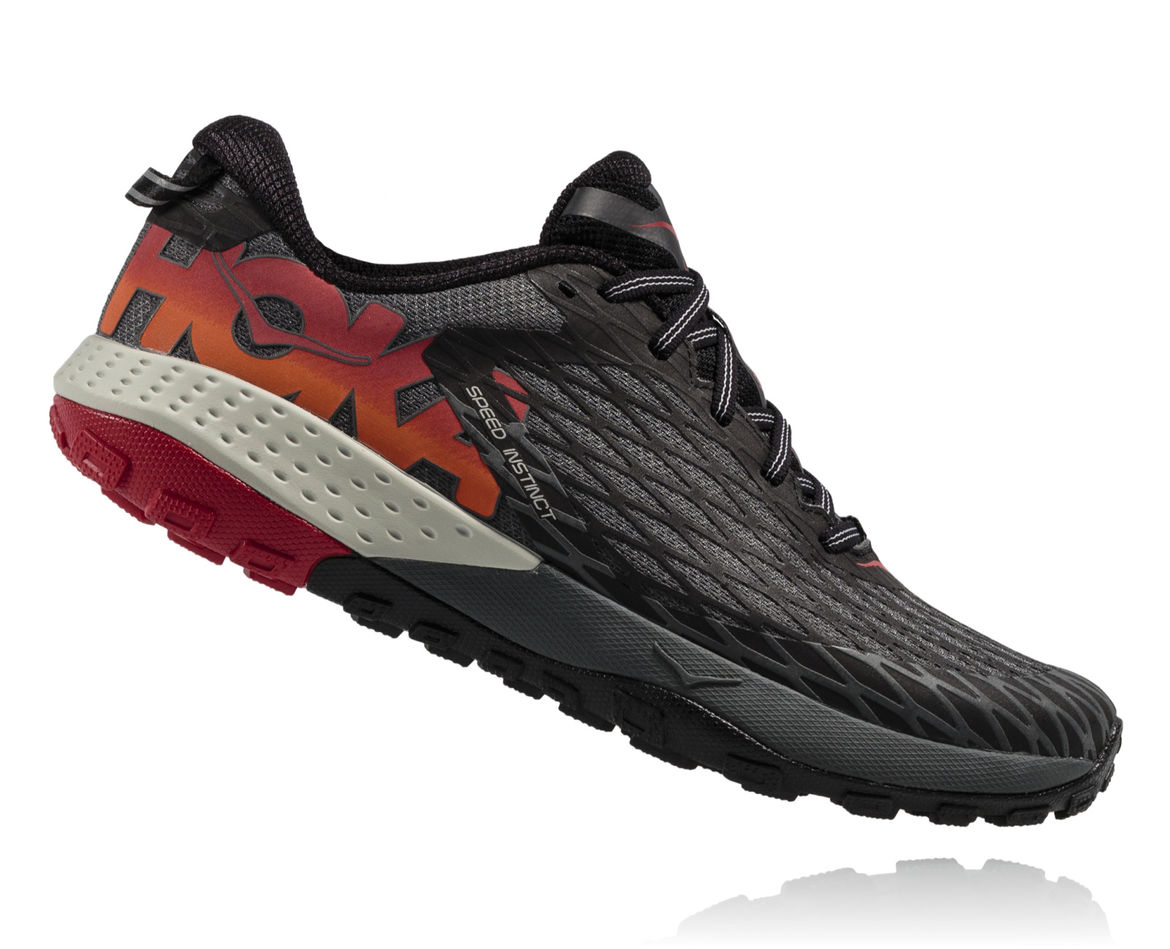 There's no way I can tell for sure, after only a small amount of time in them, but the uppers appear to be robust.  I believe they'd take quite a lot of hammer.  Even if they do look like somebody stenciled them using a disposable barbeque. 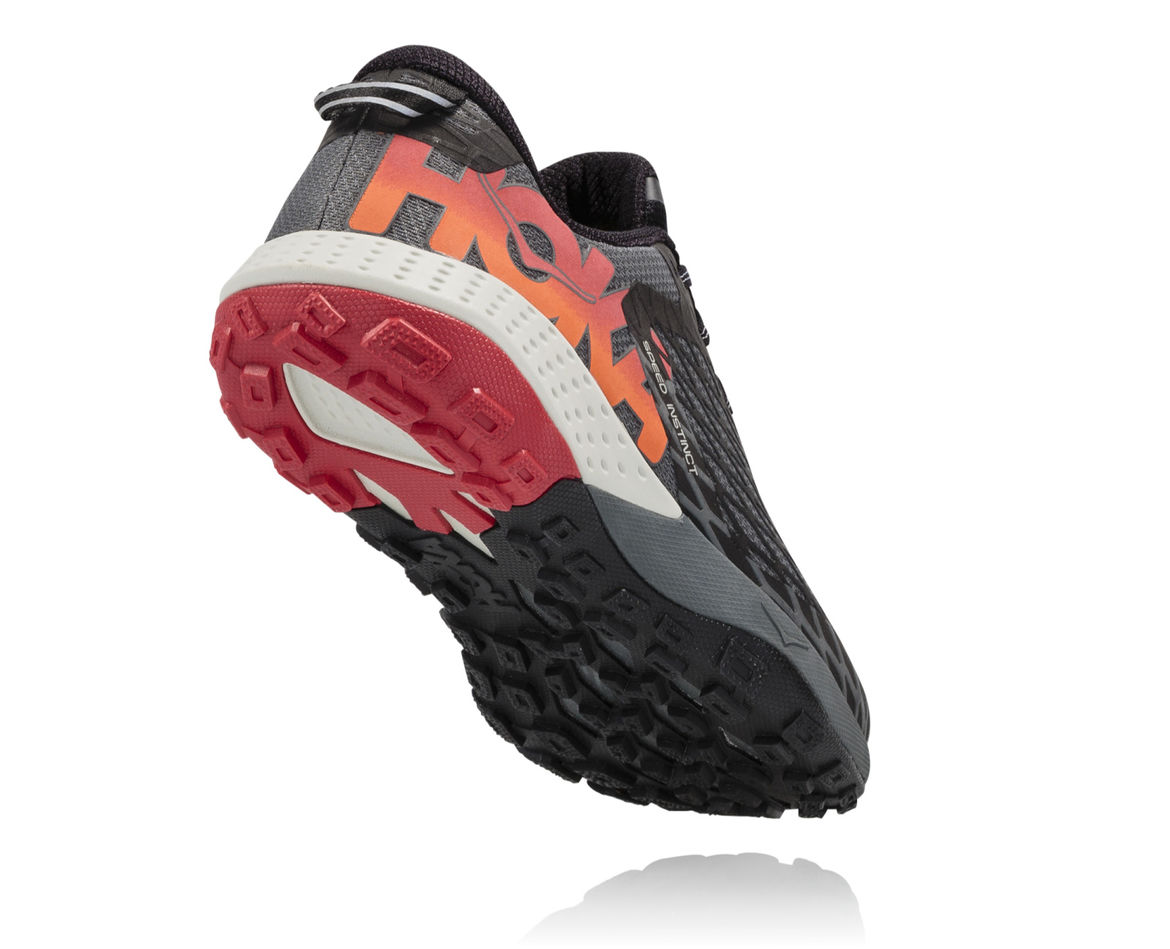 So on to the real find.  The genius feature.  A midsole with a softer mixture of eva to the rear and an in-built 'Meta Rocker' within.  In English this means that when you strike the heel - your foot is swiftly guided toward the midfoot.  Rocked across the shoe, without a collision.  The smooth movement appears to happen thanks to the depth of heel and fluid movement through the PRO2LITE midsole material.  I couldn't feel a ridge or tipping point, but could tell that my heels sank into the back of the shoe, before my arch rode across a slightly firmer area and directed me onto my toes with complete efficiency.

It's bouncy.  As you plant your foot, you feel comfy.  There's plenty of depth to prevent any impact or shock.  But as soon as you continue to transfer your weight to midfoot and begin to push off, there's a transition into a much more responsive material and a stiff toe section that keeps you from losing power or control.

It really works.  I was bounding along on my toes for a spell.  I felt like I was on road shoes while running the country lanes.  When it got complicated under foot, they kept me from slipping or sliding and I was still making steady progress.  The 4 mile downhill I covered offered enormous opportunity for the novelty to wear off, but the cushioning just invited me to keep bounding along and when I forced myself to strike at the heels, I experienced an effortless transition from heel to toe that seemed very forgiving - perhaps even tempting me away from my habitual midfoot strike altogether.

Mid run I concluded to myself that this would make a great all rounder.  More than that, an ideal shoe for those looking to retain their beloved depth of cushion, but curious about trying a low drop natural shoe for a change.  the heel striking is optional.

Those who already run well on their midfoot and rarely over stride can still get the best out of this shoe for sure.  It's substantial, yet lightweight.  Strong but comfortable.  I think it'll cope with a lot of slow steady miles, but offer somebody a fast shoe for trail racing when required.

Personally, I prefer a slightly firmer shoe.  More response.  I ran for 10 miles in the Speed Instinct and became aware that I was a little 'tippy' in them.  Losing some drive when working hard uphill.  But not so much as to outweigh the benefit on the hard stuff, or that downhill section.  As long as you're after a fun time on your feet, rather than optimum performance at all times, it's a shoe that offers incredible value at £90 RRP.

I'm already beginning to consider where I might use it next and to what extent I might benefit.  It's already tempting to use it as a safer comfier option than some of my outright racing shoes.

So far - so good then.  If I were Hoka I'd be grinning from ear to ear for having released this in the UK.

If you're considering any of the benefits I've described above, I urge you to pop in and try them on.  My bet is that by end of 2017, we'll be seeing a lot more of these on poeple's feet. 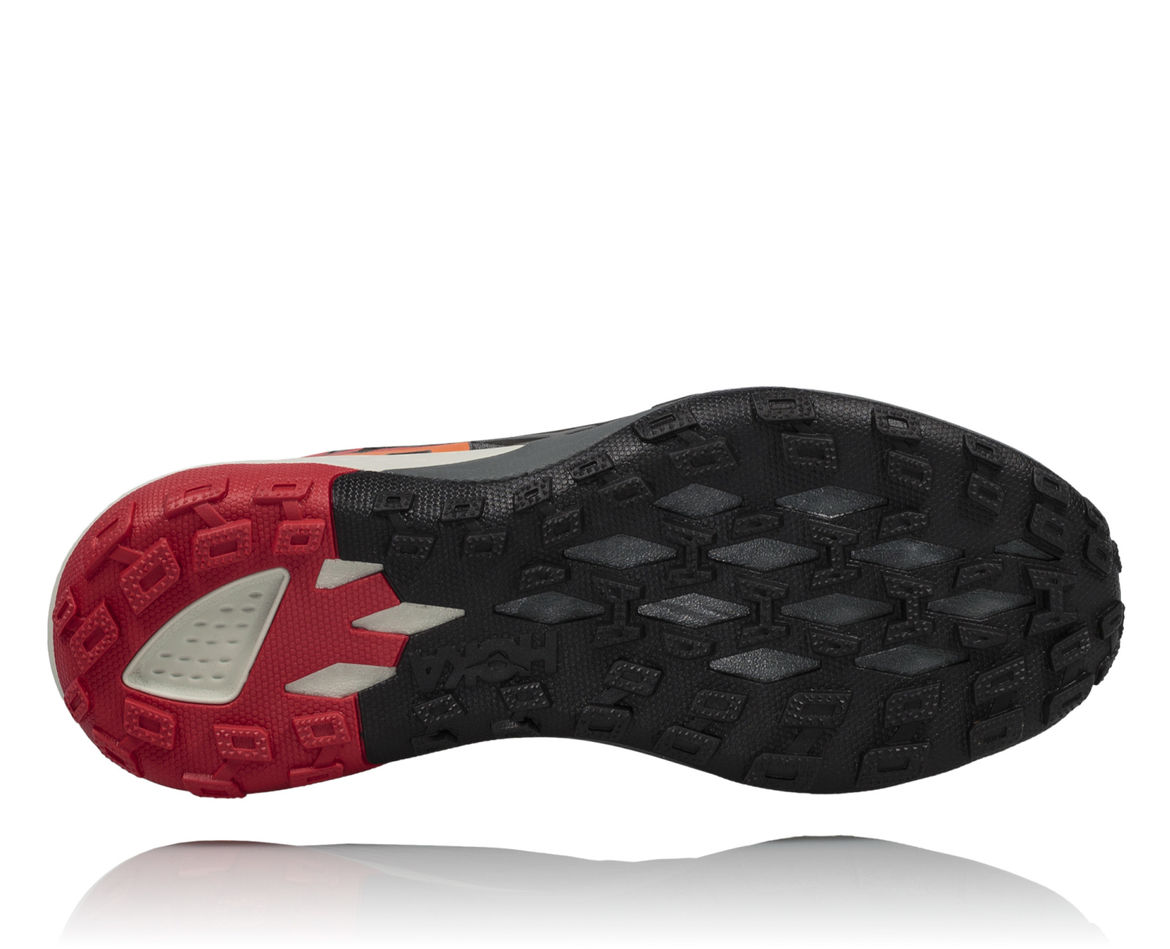 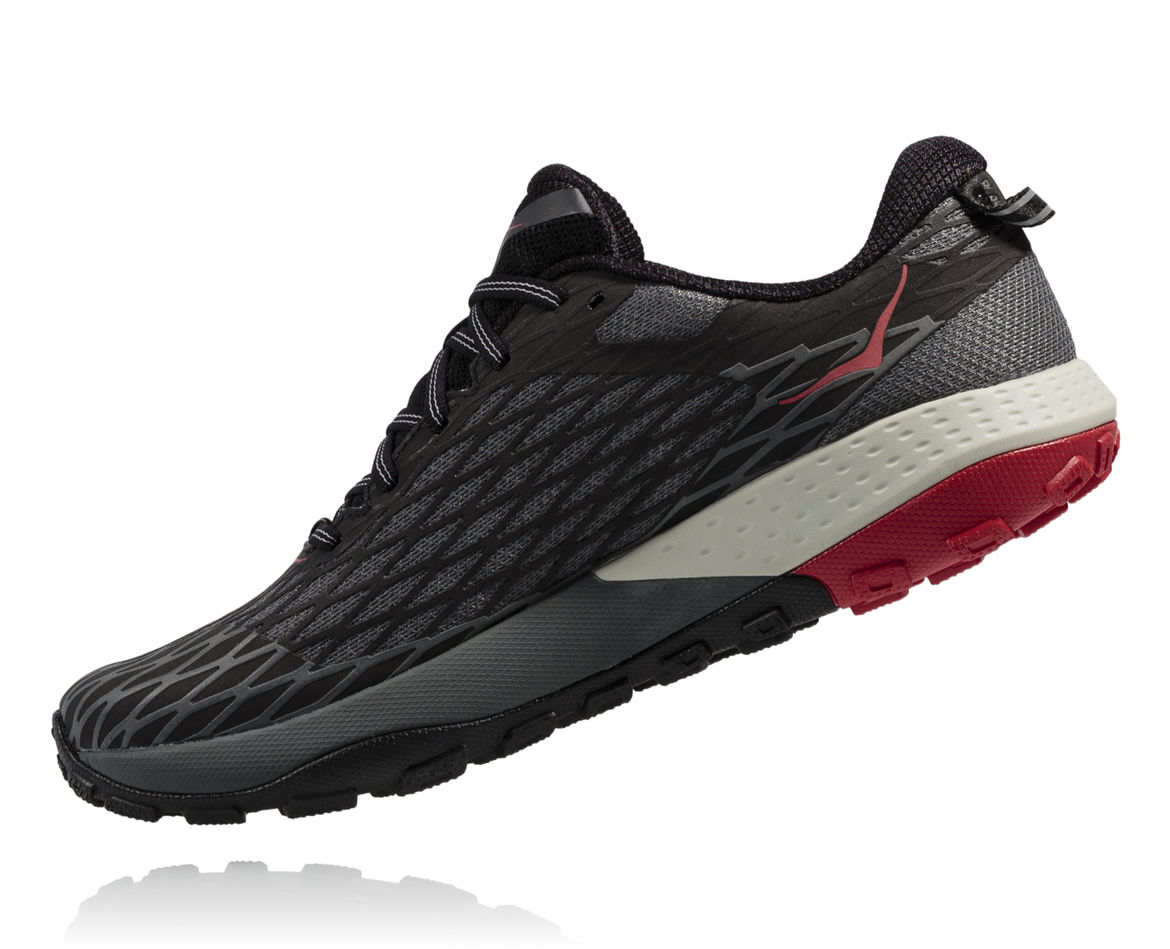 The Hoka Speed Instinct Trail Shoe is available from the Accelerate Store.  Part of our Hoka range and a new addition to our ever impressive off-road running footwear department.