HOKA ONE ONE Huaka - tested and reviewed

Let's get one thing straight, man was not born to run in anything but bare feet.

'Natural' running is therefore a concept, inspired by the very act of running barefoot, but has - over the years, been distilled into a variety of lifestyle choices, romatic ideals or outright selling tools.

In order to debunk a lot of the bogus theory and preconception surrounding the question of 'how much shoe is too much?', we firstly need to decide for ourselves whether we have any real need to run barefoot or indeed naturally, when the alternatives on offer appear so comfortable and protective.

After all, primitive man didn't have to run across tarmac, concrete or fly tipped car parts and disguarded hypodermic needles.

Today's runner can afford to take it easy.  Not everybody's a boy racer.  There are plodders.  There are those who run, only to support their first love of cycling or football and use it as a means to maintain fitness.

With all of the very valid reasons out there, it seems reasonable that many will choose to put as much shoe as possible between themself and the cold hard pavement.  But not at the expense of the ability to still run properly.

And with that said, let me take you back to late 2014, when I was struggling to cope with even a 4 mile run, in my trail shoes - thanks to lack of choice on the road shoe front.

I'd just come into possession of a high mileage road shoe (Saucony's Triumph ISO) and had become smitten with the way they made everything feel all bouncy and 'easy'.

12 months on and having become stronger again, with a renewed self sufficience, I came to realise that the extreme depth of the Triumph was in fact a little 'too much shoe' for me and that I was wallowing in them, where I wanted a little more responsiveness.

While gradually coming to this conclusion via successive runs between 2014 and the present, I became more and more acquainted with the minimal, zerodrop shoes in my collection (cautiously at first and still only on the odd occasion, but genuinely feeling a sense of freedom and 'ground feel' that suited me just fine.  I can run with relative ease, almost managing my pace because common sense says I have to (to avoid injury).  And that's where the Hoka come in.

The funny thing is, by the time I'd decided that deep cushioned shoes weren't helping me anymore - I realised that the Hokas were actually less deep than what I'd been running in. 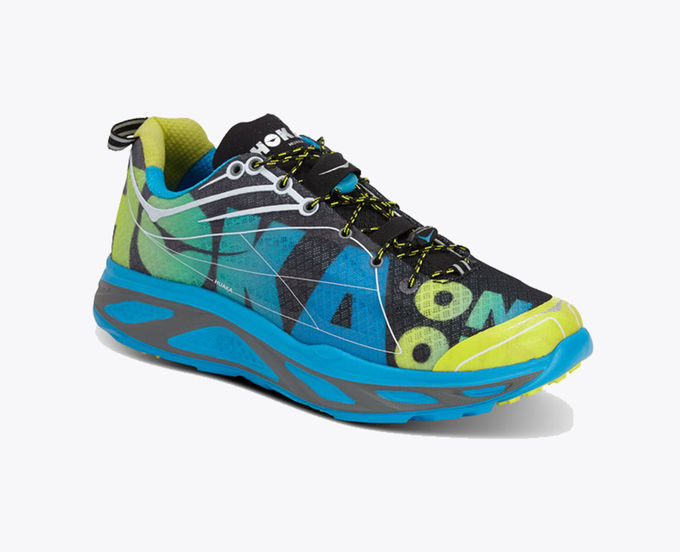 The Huaka seemed comfy when first on, with a familiar feeling of low drop, being only a 2mm off-set from heel to toe.  That meant that I was still able to run in a very 'natural' way, with freedom of movement and full use of my lower leg.  The things I liked about those minimal shoes sort of rang true in the Huaka, but with an increased feeling of reassurance that I could go further on them than I'd ever risk in the 'barefoot' alternative.

Once I was used to them (after a couple of trial runs to work/back), I was away.  I've run plenty of reasonable distances on road, with average being about 12 miles.  Some of these runs took me over trails around Agden reservoir - a little muddy in places, with loose stones and tree roots here or there.  Some of it was a little wet, but aside from having to run accordingly, the shoes remained stable and offered ample traction, given they were specifically designed for road.

Long climbs and steep descents have been simple fair, thanks to the stability and shock absorption in the RMat midsole.

The RMat is the secret, it's the material that brings with it a super lightweight, but bags of depth and a surprising amount of response in what (on the scheme of things) still represents 'oversized' footwear.

They're cushioned, but stable.  Easy to jog around in slowly, but effective when you wish to run a little faster.  The balance is incredible.  I can't remember having a pair of shoes that seemed so well suited to both ends of the spectrum as the Huaka have proven to be. 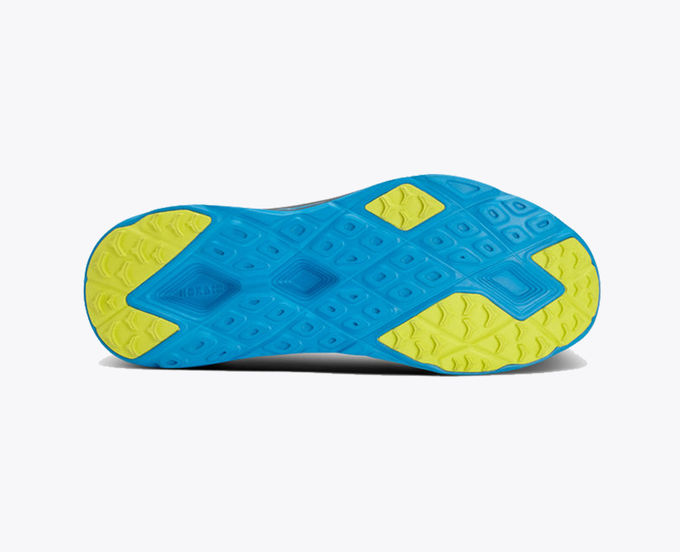 And the odd thing, as a fan of ultra distances, particularly on trails of mud, wet grass, gravel and loose rock - they remain stable even when running fast over uneven ground.  The softness of the midsole only appears to reveal itself when an object forces its way into the underside at high speed, where the midsole just 'squeezes' around the obstacle in question rather then tipping my foot to one side or the other.  This took a while before I could trust it entirely, but while out on a recent HOKA supported group run, I really got to test them over some very varied terrain.

They once again didn't disappoint.  I handled wet grass better than often happens, grabbed damp mud and gravelly paths with ample traction, handled flagstones with ease and obviously settled in comfortably whenever there was a short road section.  Even those stones and boulders just felt like interesting texture as I ran faster and faster, waiting for the familiar self preservation/fear of injury to kick in and slow me down, but nothing.

The icing on the cake was the water worn trods, that were now gullies and trenches thanks to the insane rain we've had.

I leapt from one side to the other, repeatedly avoiding (most of) the sloppy mud and never felt off balance.

The entire time (now a good 3 months) I've had them, I've been able to use them for any and every run I feel worthy, regardless of how demanding the route, or the speed at which I choose to run.  I get the exact same feeling of casualness that I get from those minimal shoes, but with a confidence those shoes never gave me.  And my preconceptions have been overturned completely.

I get protection, comfort, foot function, freedom, speed, stability and confidence at longer distances when I once assumed that I'd be falling all over the place or at risk of a turned ankle.

I can't believe how mistaken I was.  I love these shoes.  Period. 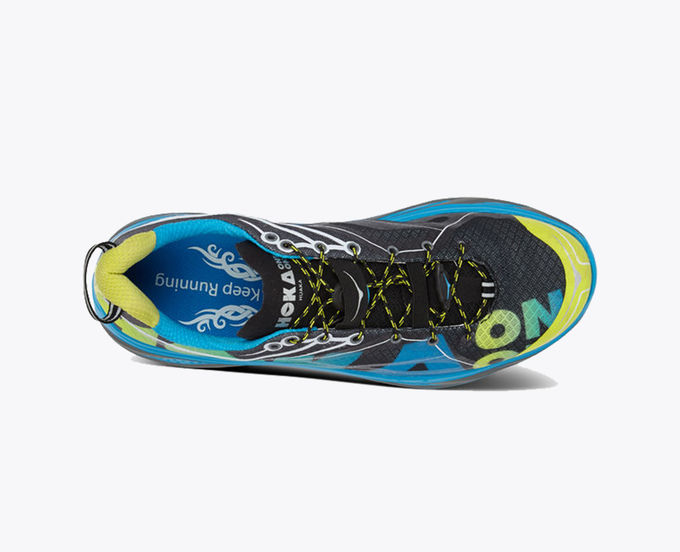 I would (of course) point out that not all Hoka One One are the same and that just as Huaka are right for me and my foot type (strong/mobile at the time of writing) along with my running style (natural upright posture and high cadence/short stride) on my midfoot rather than outright heel-striking, but I urge most people to give these shoes a go.

Most people seem to either love them or hate them, but the worst thing to do is condemn them before you've even had them on your feet.  And like me, you just might like what you get.

I rate the Hoka One One Huakas as 5 stars out of 5.  Where I'd grumble about the speed laces making them awkward to get on, once they're on, they feel very secure without feeling tight and as they come with regular laces and a choice of insoles for narrow vs wider feet, you can choose the exact combination that best suits.  So that's my only gripe effectively anticipated and silenced.

Consider me a Hoka convert.