Back home I have six waterproof jackets.  Six.  At least.

For the past 4 years I've occasionally used a Mountain Hardwear jacket, relying on its strength and insulation when the conditions looked demanding, particularly when faced with a long spell in open country - such as during the OMM in October 2014.

I've since attained a number of tops, some windproof, some fully waterproof and the problems have been the same in almost every style I've tried.

The issues haven't prevented the jackets from doing their job in the main.  But with sweaty build up comes wet clothing and dehydration.  Jackets that fail to reach my waist for having been tailored way too short in the torso, cause constant annoyance.

Jackets that frayed while remaining packed away in my vest thanks to better than expected weather conditions....boo hiss!

Many problems then, but finally - along came the Montane Minimus Smock.  Requested by me, as a possible solution to all of the above.

First time I ran in the Smock, I was probably using it against my better judgement.  Conditions were fresh, but not very wet.  The day could easily have turned worse, but were it not for having a new jacket to try, I'd have made do with a winter long sleeve and enjoyed the run all the same.  But in the Minimus, it was never an issue.

Maybe for those who've only ever run in the Minimus range, they could still feel better (see 777 below), but believe me, when you've dehydrated after keeping a poor quality shell on in light drizzle and literally had sweat running from the cuffs - you're glad when you can forget you're wearing a jacket at all.  That's what appears to happen, finally when I'm in the Montane.

Gone are the 'boil in the bag' runs I used to complain about.  I can run my first of two daily runs (work and back all week) in just a thin base layer and trust that come the second run, if the elements have closed in, I can throw on the Smock and enjoy the same temperature balance back to where I came from. 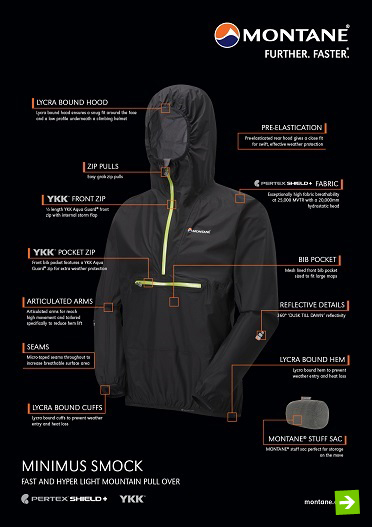 The Smock features elasticated fittings, so cuffs, waist and hood - all stretchy and automatically secure on the move.  The half zip means putting it on like a pull-over, but that's a lot easier than in my previous 'smock style' jacket, which was so rubbery on the inside, it grabbed a hold of me and wouldn't let go.  Imagine getting stuck inside your own jacket in the middle of what ought to be a quick change ahead of a sudden downpour or high winds.

No, this goes on quickly and easily, with plenty of room and appropriate length once on, so it covers my waist and remains sealed against the rain, even strong driving rain for hours on end.

There's that half zip, that every now and then might be opened so can ventilate, but for most of the time I've worn it, the zip's been up and the thought never occurred to me.

Packing the Minimus away is no problemo.  I've had it in the bottle pocket of my running vest, even the elasticated pockets underneath.  It seems to fit wherever I like.  Therefore, always ready in a pinch.

There's such a world of difference when compared to other jackets in my arsenal.  No longer will I choose to get wet, just to stay cool.  I'll never need to risk taking a windproof where I suspect I'll end up wishing it was waterproof.  I can cover up from top to toe and not cook as a result.  A simple enough requirement, but massively underappreciated by those who've never known otherwise (I suspect).

As to the variations in the Minimus range, well there's no right or wrong, but for my money - where I might have thought the adjustments on the regular Minimus would be a distinct advantage, the Smock seems to behave itself in windy weather and never really causes any frustration.  I recently took a few hail stones in the face, so a peak might have helped, but a cap underneath would have been a simple fix.  And it doesn't hail all that often.

The elastic tends to make the waist ride up gradually and means I need to pull it back down every 15minutes or so, but that's from over my bum, back to my waist, where you might argue just to leave it at the waist, which is probably where it's supposed to be!

The Mountain version of the Minimus had two pockets at the front for keeping your hands warm and as such probably served as more of an all round hill walking jacket as well as a pure running/racing jacket - as the subtle increase in weight and bulk would deter the avid fell runner from considering it.  I'd say, from experience, that using the Minimus Mitts now available, there's no chance of cold hands in any case, so no great loss. 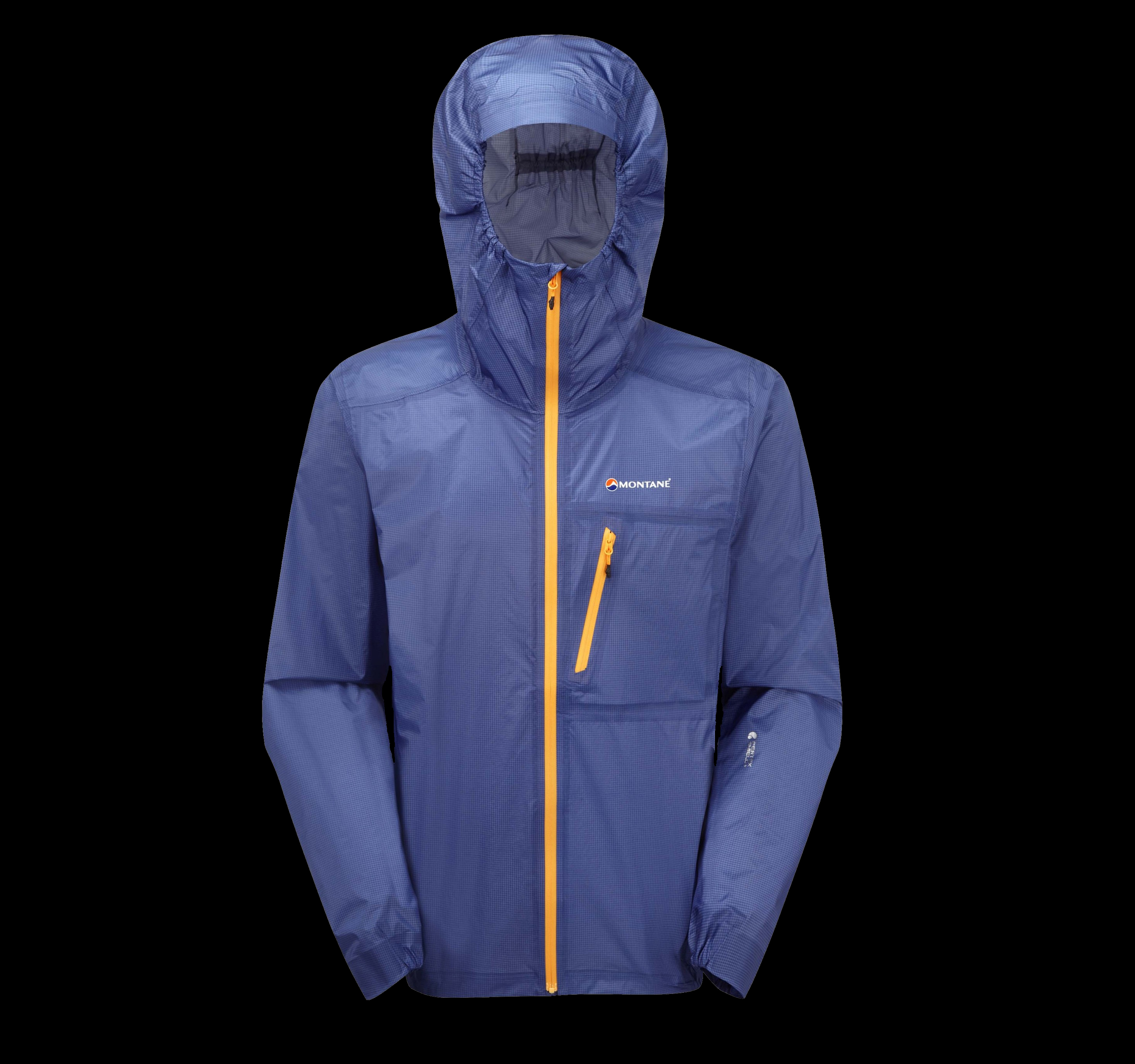 Finally - despite not spending any time in it - the brand new Minimus 777 looks to have continued the trend of lightweight, resilient jackets that will last for years*, but the evolution is in the breathability, which again - I cannot stress enough - is the key to a successful shell.  If the humidity produced when running cannot escape, then guess what.......you get wet.  Regardless.  So the new 30,000g/m2/24hrs rating for the 777, easily beats the Minimus' rating of 25,000g/m2/24hrs.

That should mean - for some, the Minimus ain't broke, so don't fix it, while others will now (perhaps wisely) opt for the improved ratings in a jacket that costs slightly more, but delivers what I assume will be the comfiest running in all weathers, which has so far been possible.

That's an assumption, but based on the difference so far - I'd expect to notice that difference and appreciate it for what it's worth.

That then is the reason we continue to stock Montane's Minimus range as a 'go-to' for our customers and is why my wardrobe full of spare waterproofs is collecting dust.