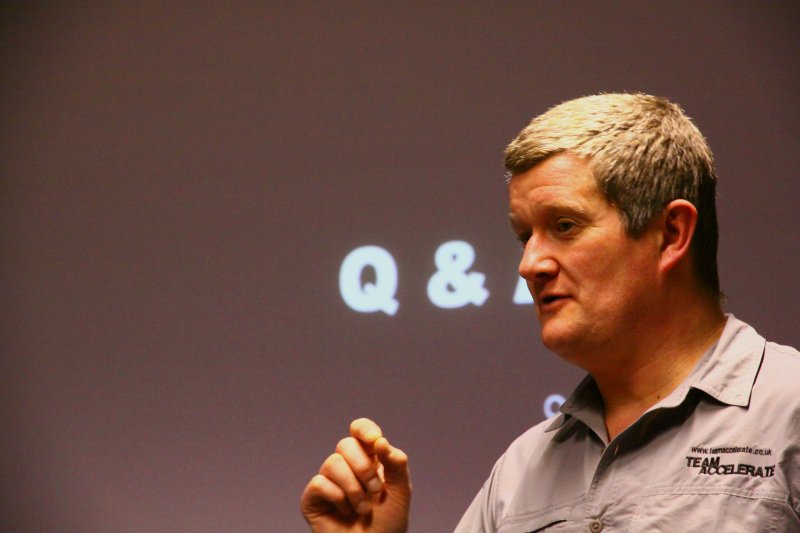 Those running a half marathon for the first time or with limited time to train will find running a half marathon to be no easy task. With a little determination, thought and following some straightforward guidelines the task in hand can be made so much easier.
In this part Stu will review some of the key considerations to building your running time in preparation for the Sheffield Half Marathon.

For any runner, especially those with less experience, it is important to build ‘time on feet’ gradually over a period of time. It is also important that anyone who advises other runners to ensure the risk of injury and fatigue is minimised and that running remains enjoyable with steps that are attainable in developing the required running endurance to run the Sheffield Half Marathon, runner or adviser.

Getting started: Things to Consider
How many weeks are there until event day?
If someone is expecting to run around a half marathon and can only currently run for 45 minutes with 6 weeks to go, is it a realistic proposition?
Simply the more time to train the better. With around 20 weeks to go this would be a much more realistic proposition and very achievable. Much safer too.

Are they prepared to run nearly 1,000 feet of ascent in the first half of the race? This is nearly the same as standing in the village of Hope in the Peak District and running to the top of Lose Hill.
This is a serious consideration with the Sheffield Half. Thankfully the climb is spread out over a greater distance and so not as extreme as a ‘fell run’, although I am sure the analogy is not lost.  So building long gradual hills (up and down) into runs does need to be considered as part of the challenge.
In setting targets for the event, be flexible.  Have a fall back goal if necessary, accepting that for some the challenge is to finish and whilst for others it may be a time improvement.  Will an injury or a bout of the flu affect the goals? Be realistic, be sensible.  There is always another half marathon. 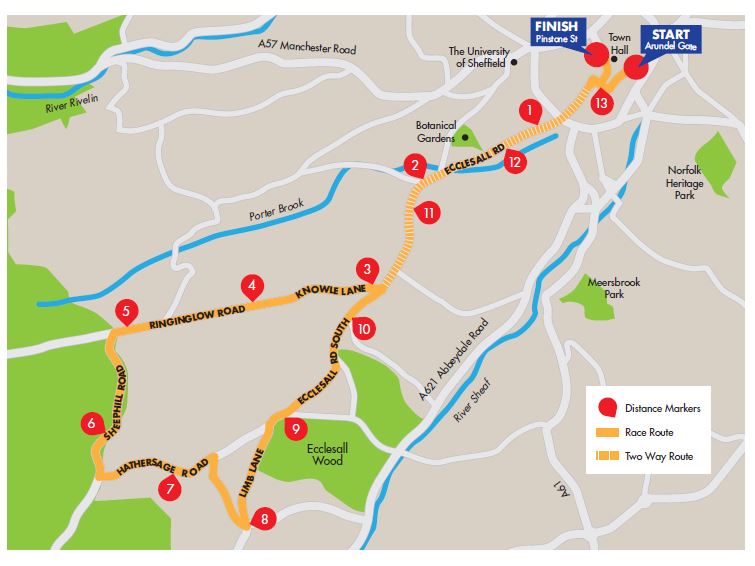 Above:  Sheffield's new Half Marathon route.

It is worth considering the areas that may need improving, such as running up (and down) that long hill. Also, think about areas that are ‘stronger’ and how they can help any runner in getting to the finish.  This can be a great motivator.

Endurance Training: Increasing the Long Run.
The key to developing endurance is running aerobically and to ensure ‘energy efficiency’ of the working muscles. Easy paced longer runs help to teach the body to burn fat as opposed to glycogen. Glycogen is in short supply compared to fat, so it is better to use fat as our main energy supply. At the same time we also teach the body to better use oxygen, so becoming more efficient.

Easy ‘Overdistance Runs’ are defined as those that have never been tried before, including new run duration or ones that have not been attempted for a while.
Intensity: Very, very easy, a pace you would be able to sing a song for much of the run, excepting some hills. Often referred to as Level 1 for heart rate users.
Benefits: these runs really help the body cope with oxygen transport and energy efficiency whilst running.

The second type of 'Endurance Run' is only a little quicker. This type of run is ideal for those duration of runs that have been completed before.
Intensity: Very easy and at a pace that conversation takes place with shorter sentences grouped together. Heart Rate users will know this as Level 2.
Benefits: Energy systems are starting to be worked to their maximum efficiency, plus it gives the working muscles a chance to develop to the pounding (impact and joint stabilisation) they will get from running longer distances. The more efficient the runner is then the easier running becomes and with less fatigue.
Many first timers use this level for their first half marathons.

Building Intensity.
For the first 6-12 weeks the focus should be on developing endurance with overdistance (L1) and endurance runs (L2).
It is perfectly normal for many runners to want to run faster as a way of developing speed, plus it can be fun. This should be introduced gradually and in bite size chunks and will be discussed in a later article in this series.

Recovery Running
This type of run should follow any overdistance or endurance run, or one that involved a harder effort. It will be shorter in duration, perhaps 20 minutes.
Intensity: Very, very easy, a pace you would be able to sing a song for much of the run, excepting some hills. Often referred to as Level 1 for heart rate users.
Benefits: allow working muscle and energy systems to recover and most importantly to adapt to the new stresses placed on them.

This is often referred to as the Hard – Easy method of training and is ideal for all levels of runner.
During periods of building duration it is also a good idea to use every 4th week as a recover week, giving the benefits listed above, time to really cement themselves.  So taking the example of the long run from above:

So in Summary:
- Long Slow Distance running helps build a solid endurance base and energy system.
- Increasing running time using the 10% rule is considered safer than an adhoc approach.
- Recovery training is essential in giving the body time to adapt to new training loads. It is also a great time to give the mind a break from continually pushing the boundaries. Remember ‘Hard-Easy’.
- Only change one ‘effort’ in a run. So increasing duration and adding long hills into the same run may not be so safe and lead to increased and unnecessary fatigue.

Stuart, is an experienced coach, working with athletes of all abilities for over 25 years. He was an early adopter of utilising heart rate in training and has been involved in lactate testing since the early 90's. You can find out more about his experience here >> and can follow him @runstu

Many Thanks to Chris Hough for editing and reviewing these words.  @houghboyrunner