It was an all too familiar scenario - a rep with a sample.  The difference was the product sounded a little odd.  Socks that had a rubbery feel on the inside, but were entirely breathable, comfortable and reduced the chances of a blister.  Hmmmm?

The reason is their unique combination of lightweight feel, thick cushioned texture, comfortable seemless construction and the secret weapon.....GRIPLOCK! 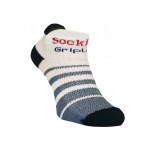 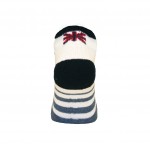 GRIPLOCK is the silicon weave built in to the fabric on the inside of the socks.  As the name suggests, they grip the foot as a result and therefore eliminate the shifting of fabric against skin.  Once in position, they stay in position.  The rubbery feel you get when running a finger across the inside doesn't occur once they're on your feet, so they don't feel in the least bit weird (I did wonder).

Constructed from CoolMax - they wick sweat and moisture away from your foot like crazy.  They hold like nothing I've ever tried.  The thickness is just enough, without feeling swamped.  SockMine aren't stupid either, they've left the GRIPLOCK out when it comes to the heel and toe sections, so the finite amount of movement that is necessary for the foot to do its thing remains unaffected.  This also means that toes can spread properly, relatively unrestricted.

The running is perfect and for such a busy sock - I geuinely forget I have them on.

They're fairly thick (thinner versions available), but actually not too hot thanks to the way the temperature regulation kicks in.  The silicon itself plays a small part in keeping the socks cool, since it doesn't retain much heat.  The balance it seems is just right.  They stay comfy and thick when on the move, time after time.  I've never had a bad time in them.

Short runs, long runs, long days at work in them - always comfortable.  And where other socks have ended up feeling a little listless and deflated after a few washes, these have remained padded as they were on day one.

Just as with certain other socks (cough, Injinji..) there's a little practice makes perfect before you get them on in the right way (the non slip interior means you have to gently lift them away from your foot to move them), but they're hardly a struggle.

The rest is 'Gravy' as they say.  They feel good.  They work.  They add an extra level of comfort to even my comfiest of shoes.  I'm sold.

As a summer sock, my particluar pair (GRIPLOCK Anklet) felt thicker than I would these days prefer, but worked brilliantly well.  As the colder weather draws in, or when I'm off to the open moorland above Stanage Edge in Derbyshire's Peak District - they're something I look for every time I open my sock drawer.

I'd heartily recommend that people give GRIPLOCK a try.  I rate them as highly as any sock I've tried.

You can purchase a pair here.

Chris is supported by Team Accelerate