I should admit from the outset that I am an Altra Zero Drop fan.  I have a pair of Lone Peaks' that are the backbone of my trail running.  However, many of the trail runs and races I do always have some element of road work in them and if I come within 50 yards of a road in my Lone Peaks the soles of my feet instantly start burning.  So I have been trying to find a pair of cushioned shoes that I could wear on the road as well as the trail.  Nothing was quite right; my feet are square and wide and all other shoes seemed to pinch my toes.  Then I read about the Altra Olympus.  This was perfect;  I was thinking Lone Peaks on a cushion.  I ordered them and waited with barely contained excitement and hope. 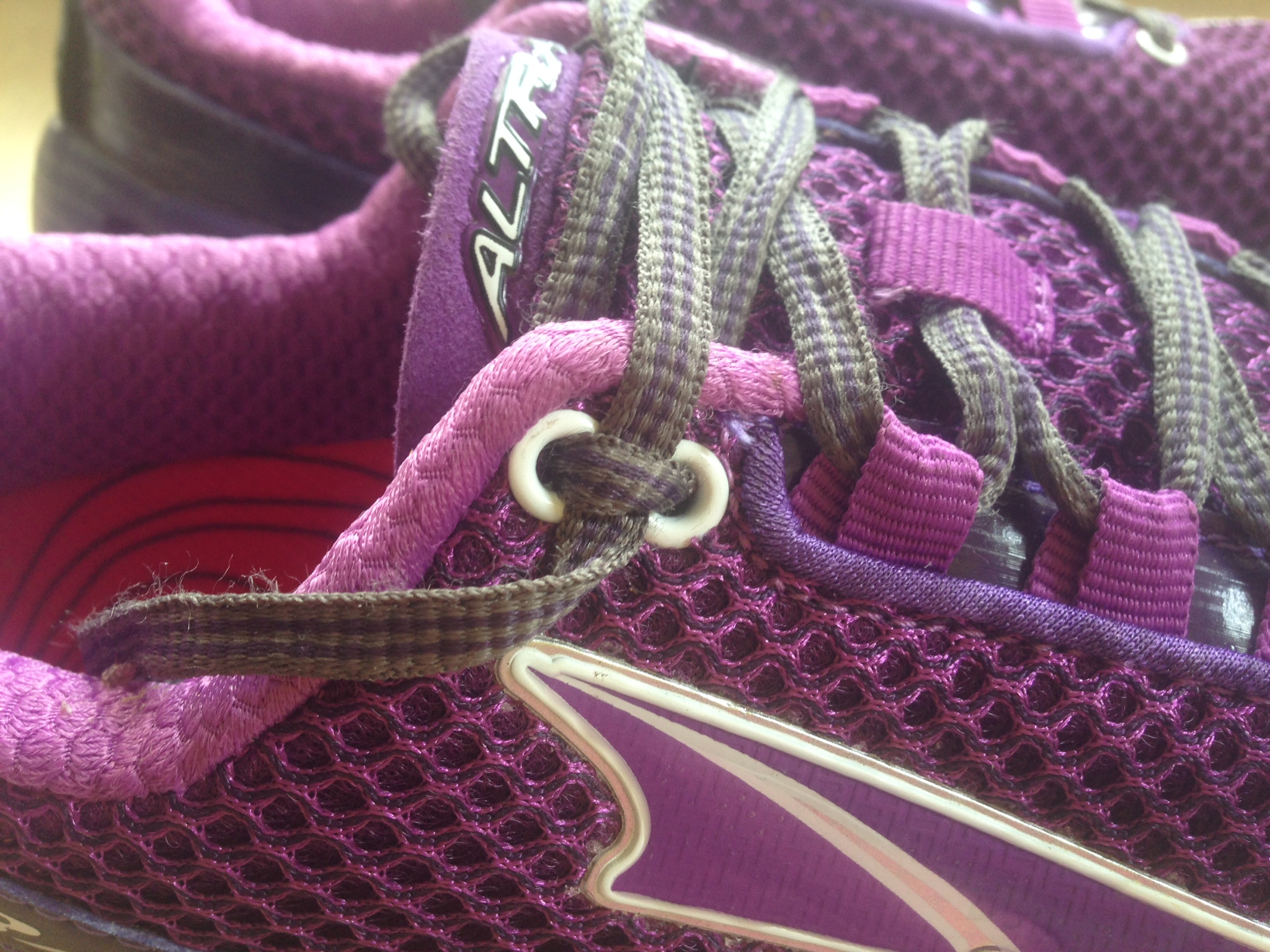 When they arrived I was mightly relieved at opening the box to find they were a cool purple, not a shocking pink.  They were pretty much as I had expected – a nice stack height, that generous toe box and flat laces.  I also noticed with interest the positioning of the top two lace holes.  I have got into the habit of looping the laces between the last 2 holes before crossing them over to provide a good anchor point for tying the shoe.  It seems to me this method is exactly what Altra had in mind when they designed the lace holes.  The only aspect of the shoe that caught me by surprise was the tread – were these really suitable for the trail? In comparison to the Lone Peaks, the tread was very modest.

Trying them on they were unsurprisingly very comfortable. The first thing I noticed, however, was that my toes were a bit closer to the end than in my Lone Peaks.  I had chosen the same size as I assumed the sizing would be the same, but I would have been interested to see what difference another ½ size would make, if they do half sizes.

Obviously the next thing I did was to take them for a test drive.  Off I went, a 3.5 mile route of which the first mile and last ½ mile were on road.  Immediately I felt like I was a cartoon character with springs on my feet.  I felt as if, with each stride, I was bounding down the road like Neil Armstrong.  I have never run with such cushioning before so every nerve I had was concentrating on what my feet were telling me.  Firstly it was good (I was bouncing!) and my feet were singing with all that cushioning, but then my knees started to hurt.  I realised my exaggerated, bouncy stride was playing havoc with my form so I concentrated on shortening my stride and leaning forward.  The soles of the Olympus feel like they are slightly curved, like a rocking horse.  But when the weight of your body is on one foot, that curve feels like it reverses, so your foot bends over a small hump.  This alarmed me at first because I am slightly flat footed and have learned that my feet will absolutely not take any form of support without causing pain in my knee.  However, once I concentrated on my form I found this curve encouraged my foot to land with a more forefoot strike; the knee pain went and I was able to settle down into running comfortably. 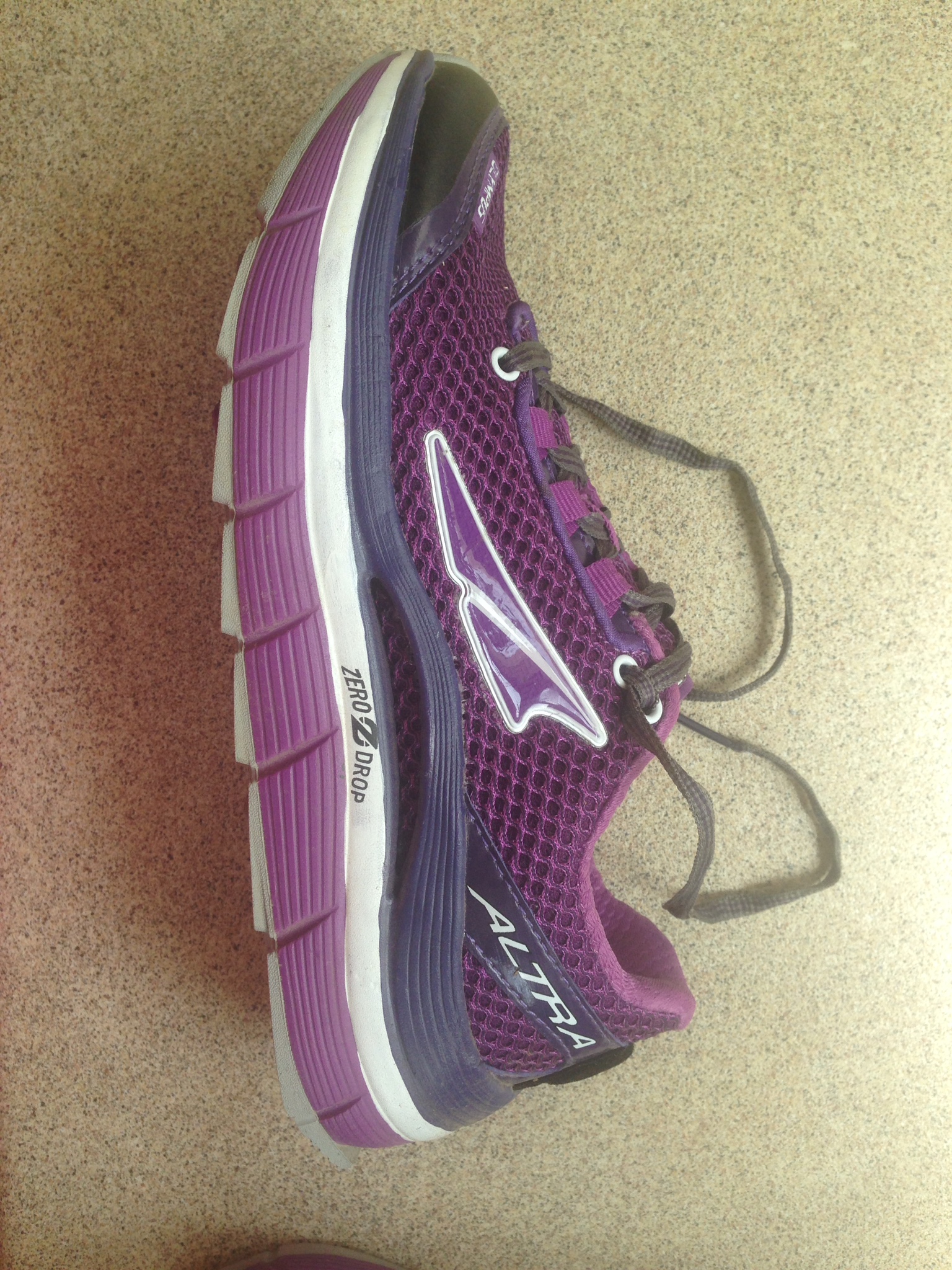 Despite the cushioning and the modest tread, these shoes really felt great on the trail.  I was able to spring around with no suggestion of any instability in my feet or ankles – they felt amazing.  There is a steep hill that when dry is hard-packed, ankle-turning tram lines, with loose stones and rubble making it hard going getting a solid step.  Going up or down was no problem for the Altras at all, giving a firm and reassuring tread with each stride.  I would say, however, that while I feel these are perfect summer shoes, when the fields around me are heavy wet clay in winter, I would need to revert to a shoe with a more aggressive tread.  But at the end of this run I came to the conclusion that not only were the Olympus comfortable on both road and trail, they were also encouraging me to run correctly.

At this point I should also confess that I was planning to wear them for a trail marathon two days later. Yes, yes I know the mantra – NEVER wear anything new for a race.  But they were the most impatiently, anxiously anticipated shoes I have ever wanted and as there had been a slight delay in shipping, and Accelerate had busted a gut to get them to me in time, there was no way I wasn’t going to wear them for one of the most important races of my year.  Although I did waver slightly in the morning when I went to put my shoes on, I ignored my sensible voice (something I am very good at) and literally toed the line in my Olympus’s. 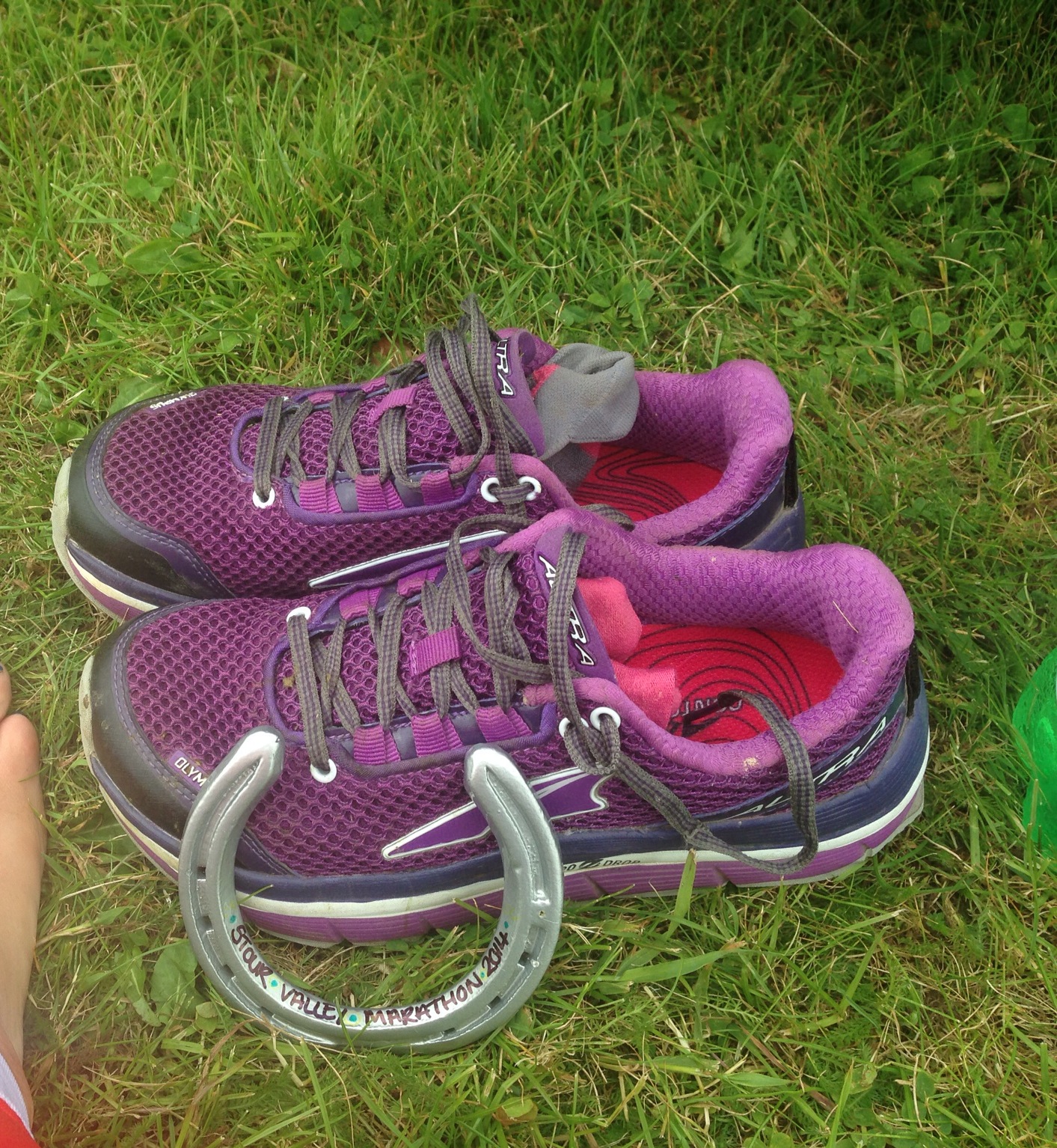 I am happy to report that the shoes were much admired, they did their job quietly and efficiently and the race ended with my feet feeling perfectly happy.  I removed my shoes and socks at the end and inspected my feet, which looked exactly as they had done before the run. I was extremely satisfied and smug with my decision to run in the Olympus’s and I cannot think of a better way to compliment a running shoe than by being able to say that I ran a full trail marathon in them straight out of the box (and did rather well too!).

Tried Tested and Reviewed, The Lone Peak
Bright red, well you can't really miss them can you? In fact the bright orange version for the ladies goes one step further in the colour stakes. Not to everyones taste, perhaps, but for me the brighter the better. So would the Lone Peak, well, brighten my running or leave me with that 'flat' feeling?  Read More >>

Altra Zero the Latest Arrival
Altra offers a fairly small range of running shoes compared to the bigger companies, yet their approach is straightforward. All their shoes are zero drop, that is the heel and forefoot height are the same distance from the ground.  Read More >>

For further perspective, check out Stu's 'Buzz' blog about the Men's Olympus here.