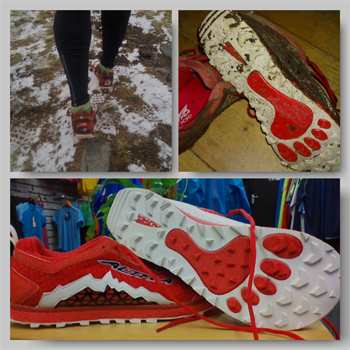 Bright red, well you can't really miss them can you? In fact the bright orange version for the ladies goes one step further in the colour stakes. Not to everyones taste, perhaps, but for me the brighter the better. So would the Lone Peak, well, brighten my running or leave me with that 'flat' feeling?

Altra Zero arrived in the UK in November, with only a hard core demanding they become available in this country. For the most part it was a case of who the heck are Altra?  Well Altra are one of the fastest growing brands out there (See the article Altra Zero the Latest Arrival) and across the pond they have certainly made their mark, quickly establishing themselves as a top ten brand in the US.  So with the stores belief in choice and that these slotted neatly into the 'Natural Running Centre', it was very much a case of let's see what the Altra's are all about.

Straight out of the box and sizing is good and accurate.  Yes, they are bright in Ferrari Red and they catch the eye; as does the spoon like shape of the shoe.  A good healthy width to the toe box ensures the forefoot has room to spread, allowing your toes to do their toe thing.  It felt good and at no point has the shoe ever felt too wide, airy or roomy. Heel and mid foot felt comfy, in no way restrictive nor in any way an all encompassing fit.  More slipper than running shoe.  So far so good.

The midsole is the depth of a more traditional shoe, it's just flat! So no heel lift at all. This makes sense as many have found the so called minimalist shoes to offer nowhere enough in the way of cushioning or protection from rough ground.  Having tried this type of shoe before you certainly find them to be hard work as you have deal with a greater amount of shock and every lump and bump on the ground. The Altra Zero Drop Lone Peak on the other hand, was so much easier to run in. The firmness of the midsole provided stable, yet forgiving underfoot protection - even on road sections. Having spent the best part of the last two years in 4mm and 3mm drop shoes, the transition over was relatively straightforward. Yet, again though you could tell you had moved down in heel height - a slight achey feeling after the first few runs ensured I new muscles had been fully utilised. Thankfully, there was nothing a good stretch couldn't sort out.
The midsole felt responsive, didn't absorb all the essential power when pushing-off and all in all made for a great running experience.  Box ticked.

So what about the grip? In the UK we are often far too obsessed with grip, especially, it would seem, the further North you travel. The wide base of the shoe ensures stability whilst the overall flexibility of the shoe ensured a very reasonable 'nimble ride' for a trail shoe. OK, so it's not in the same league as the Inov-8 Trailroc, but it is certainly isn't bad. Remember this is a trail shoe, all be it a fairly agreasive looking one. The herringbone studs are deep and well spaced for mud clearance, even offering the potential for a good surface area to grip on rock.  So how about it then, would the grip be the first let down?

The grip was surprisingly good.  OK as a trail shoe I can't fault it. Rock, wet rock, mud, slop and hard packed trails, well another series of boxes ticked then. So Ok, let's go one step further.  How about running along the tops of the Peak District in the middle of a wet British winter and some open ground... oh go on then. I'm surrounded by Inov-8 X-talons and then there is me in bright red, spoon shaped trail shoe from, 'Altra who?' A couple of weeks later I am running over Pen-Y-Ghent in the Yorkshire Dales. There is snow on the ground, patches of ice and a run over to Plover hill beckons. It's cold bog, sinking ice covered foot-traps and slow going... these shoes are gonna get tested.

OK, compared to a pair of X-talons there just wasn't the same ground penetration and grip, but in truth only occasionally.  They were good, in fact very good.  Not a fell shoe in the sense we know it, but I would not hesitate to wear them again in these conditions. Even on the flagstones they were not as slippy as many shoes I have tested. The grip was the big surprise and one that exceeded my expectations.

So all good then? Yes, I believe so. Just over a 100 miles in and the Lone Peak has joined the ranks of my growing pile of favourite shoes. So, they are not as nimble as my Inov-8 Trailrocs, nor as fast feeling as my Salomon Sense and perhaps not quite a good a fit as my Patagonia Evermore's... but I do like them, very much so. As to Zero Drop, oh yes, it just feels right and funnily enough very natural.

Article written by Stu Hale, one of the Shoe and Running Technique Specialists at the Accelerate Store and Performance Centre. You can follow Stu on Twitter @RunStu