You're offered a pair of brand new shoes.  The catch is to perhaps review them.  And that's the trick.  If you don't like what you're feeling, you're reluctant to share the news, for fear that you'll be sending the wrong impression and actually be putting people off, when the idea ought to be promotion of brand.

All too often, the reviewer uses his/her discretion, sharing the positives while holding back and being 'economic with the truth' on matters which might prove something of a let down.

And so to the latest Raidlight shoes.  A breath of fresh air where Raidlight footwear has been concerned.  The issues that might once have caused a very short review indeed are well and truly behind us and we now have a range that delivers.

That said, the focus here is on the one model - REVOLUTIV.  With its 6mm drop from heel to toe, semi-agressive outsole and rugged construction, at first glance it appears to be a relatively tough shoe.  So far - so fit for purpose.

Delve a little deeper and there are a few discoveries to behold... 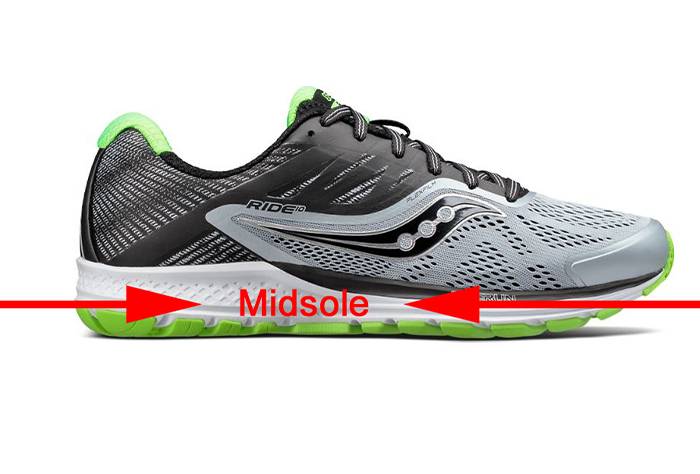 The shoe has a shape that fits my foot and offers a sculpted, but flexible hold at all times.  While the in-built elastic liner creates a stretch fit boot which means there are no seams or rough edges to fight with.  The intension is for this to be a trail shoe for rocky or soft ground, but nothing approaching steep wet terrain.

That said, it has a sticky rubber outsole with 6mm lugs for traction in wet grass or surface mud.  Gravel and rock pose no particular threat, as it adheres very well to almost any surface I've tackled so far.  Braving the slopes, it still handles surprisingly well.  With a tread pattern that features studs at a reasonable distance from one another, preventing build up when the ground is thick with mud or loose dirt.  The studs are all flat, so there's a good trade off between depth enough to sink into damp stuff, but friction on the flat.

The midsole is 'Dual Density', which means that within it there are portions comprised of different materials, with different amounts of give.  The most significant of these areas is the forefoot, with a softer layer underlaying the stuff right against the foot.  This allows protection against impact, without the feeling that any one part of the foot is prone to collapse.  With the 6mm increase at the heel, this feeling is even more protective and makes heel striking (potentially) less harmful.

To cap things off, the neoprene style elastic sock liner really adds a degree of comfort and a barrier against debris that might otherwise find its way inside the shoe.  Speed lacing means convenience and assurance that you won't find yourself stopping repeatedly in order to re-tie them.  Complete wit a 'lace lock' strap, the loose ends can be secured against the top of the shoes until you're ready to unfasten them.

Aesthetically, the shoes look brilliant, with some striking colours and nice lines.  The drop isn't too harsh, so there's not too much ungainly midsole exposed to the world, with the paint job breaking things up enough to lend the shoes a race like sleakness, for a shoe with such a boot like construction.  Easy on the eyes, comfy on the feet.

The dual density midsole offers a brilliant ground feel to those who like that sort of thing.  For some it will still allow a few knocks when the ground is lumpy (roots and rocks), but definitely feels soft and cushioned on hard flat areas (road/dry trail).

The upper remains comfortable at all times, but might not always feel as stable as it ought to when attempting uneven technical terrain, so the traditional laces provided with the shoes as an option could very well prove the better option over time, since they can be tied even tighter or configured into a 'lock-lace' arrangement at the ankle end.

The speed lace always seems to outreach the lace lock elastic, to the extent that you may wish to trim them, or secure the laces in the rim of the liner.  Maybe even wrap the excess a few times, which begins to feel like a bit of a pain.  Like I say, the spare laces might just win out in the end.

Traction is incredible.  As is grip on all surfaces tried (mud, grass, dry trail, road, gravel).  The midsole suits those who prefer to sense the ground conditions, rather than those expecting to only feel the inside of the shoe.

Heel striking, downhill, on road, proved easy and comfortable, so to cut loose on downhill sections is a joy, but the shoes are very well balanced and the transition from heel to toe is smooth, meaning that there's no noticeable step within the shoe, ensuring that for a mid-foot striker like myself, landing with my foot flat to the floor, despite the 6mm drop, felt very stable and natural.  There hasn't been any slapping or clapping as I run.

290g for a versatile off-road shoe that allows comfort from door-to-trail, but which deserves to be used in the open country where conditions are mainly dry - I'd class that as a freedom of movement worthy of the best racing shoes we've seen in recent years.

The only points to consider when it comes time to revise this shoe, might be the foot hold while using the speed laces and the density of the midsole, which I feel may have been pitced a little to far toward the softer side.  Firmer under foot for a shoe withthis much grip and you'd have a world class racing shoe for trail or light fell use.

A very strong 8/10 for all things considered.  A shoe which I continue to use with enthusiasm.  It's FUN.   In equal parts road/trail and occasional bouts of steep hillside.  I don't mind the ground feel, but I suggest that a more protective shoe be used for longer runs of half marathon and over, if you don't wish to feel jabbed at on uneven terrain.