I ran in a race recently.

It was a first in many ways.

I've owned the top for quite some time, but haven't put it through anything like the kind of use it's designed for.

I've worn it at work, as a 'shop shirt', representing both inov-8 and Accelerate in equal measure, while keeping the chill off (the store is an old ex bank and stays very cold for most of the year).

But it was begging to be run in.

Occasionally, I'd try it out on my run to/from work, but with the mild temperatures outside until recently, I'd simply boiled and subsequently told myself off for not going with the tee shirt a while longer.

1st of December and that was to change.  Finally. 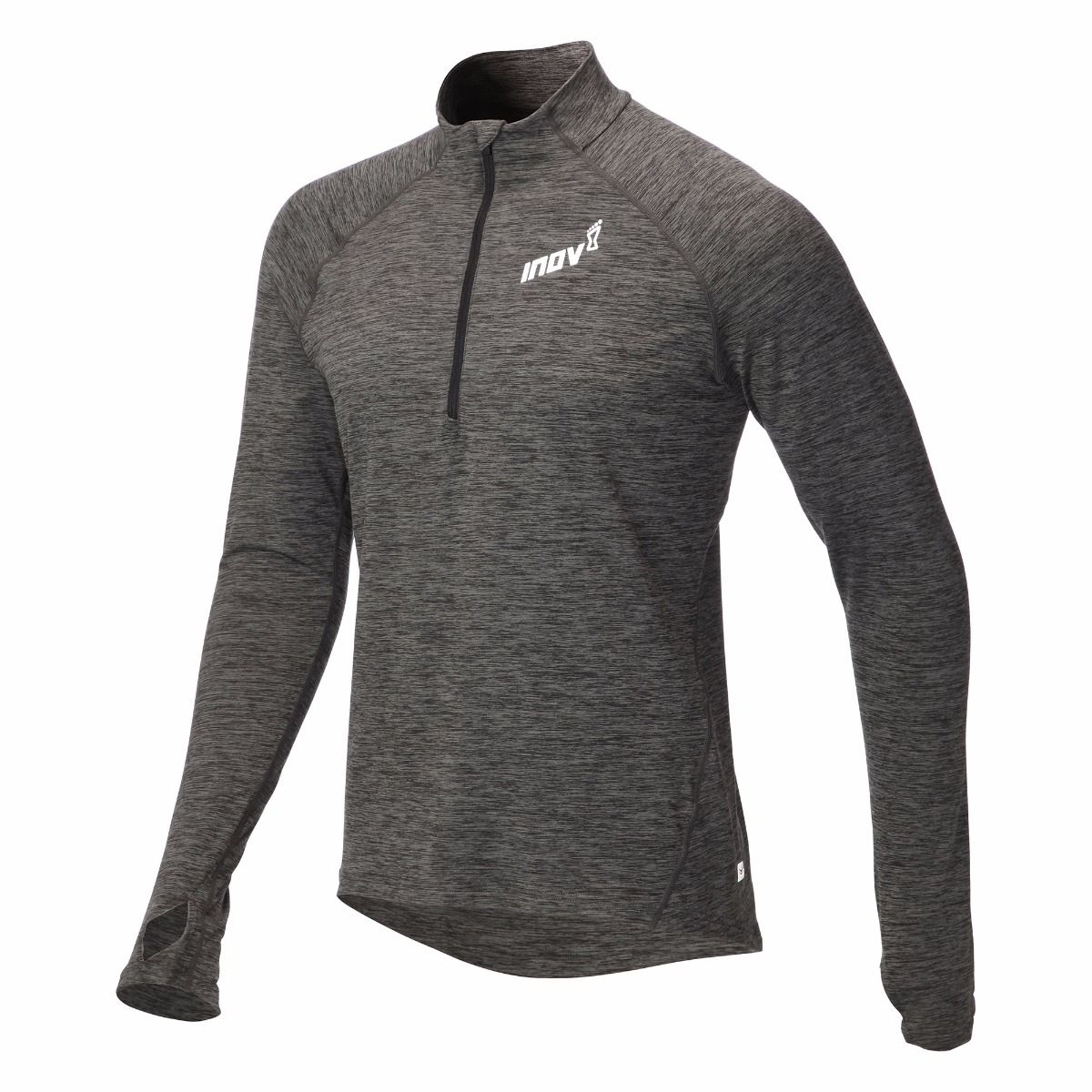 I had to choose a top which would afford me some cover, while allowing a hard effort over an extended period.  Not too sweaty....  but not too thin either....

I was headed toward a very exposed and remote location outside of Sheffield, known as 'Cut Gate'.  High ground, relatively featureless.  Not much in the way of shelter and on this particular day, cloud cover was low enough to shroud the tops completely.

So rain, drizzle, winds, cloud cover.  In a word....WET.  And the temperature on the car dashboard read 6 degrees.

I donned the inov-8 mid layer, resisting the temptation to add a base or shell.  Others were debating and adding layers right until go time.

Steadily building from a deliberately easy start, I crept up the field.  We began the climb, as my body temp had managed to fill the dry shirt with plenty of humidity.  I was cosey, but happily I wasn't cooking.

With miles of constant ascent, all the while rained on, sideways, I felt nothing but comfy.  The wind didn't cause alarm, as the at/c mid is easily thick enough to block the odd gust, but the rain was soaking into the fibres.

By design, it wicks.  It's a MID layer, so it's supposed to fetch moisture from underneath and bring it to the surface.  However, I was using it 'next to skin', since I run quite hot generally and with the workload I was generating plenty of warmth to keep the now saturated long sleeve from cooling down too rapidly.

Still I felt comfortable.  I wasn't overheating, or feeling the need to slow down for fear of dehydration.  I was enjoying myself! 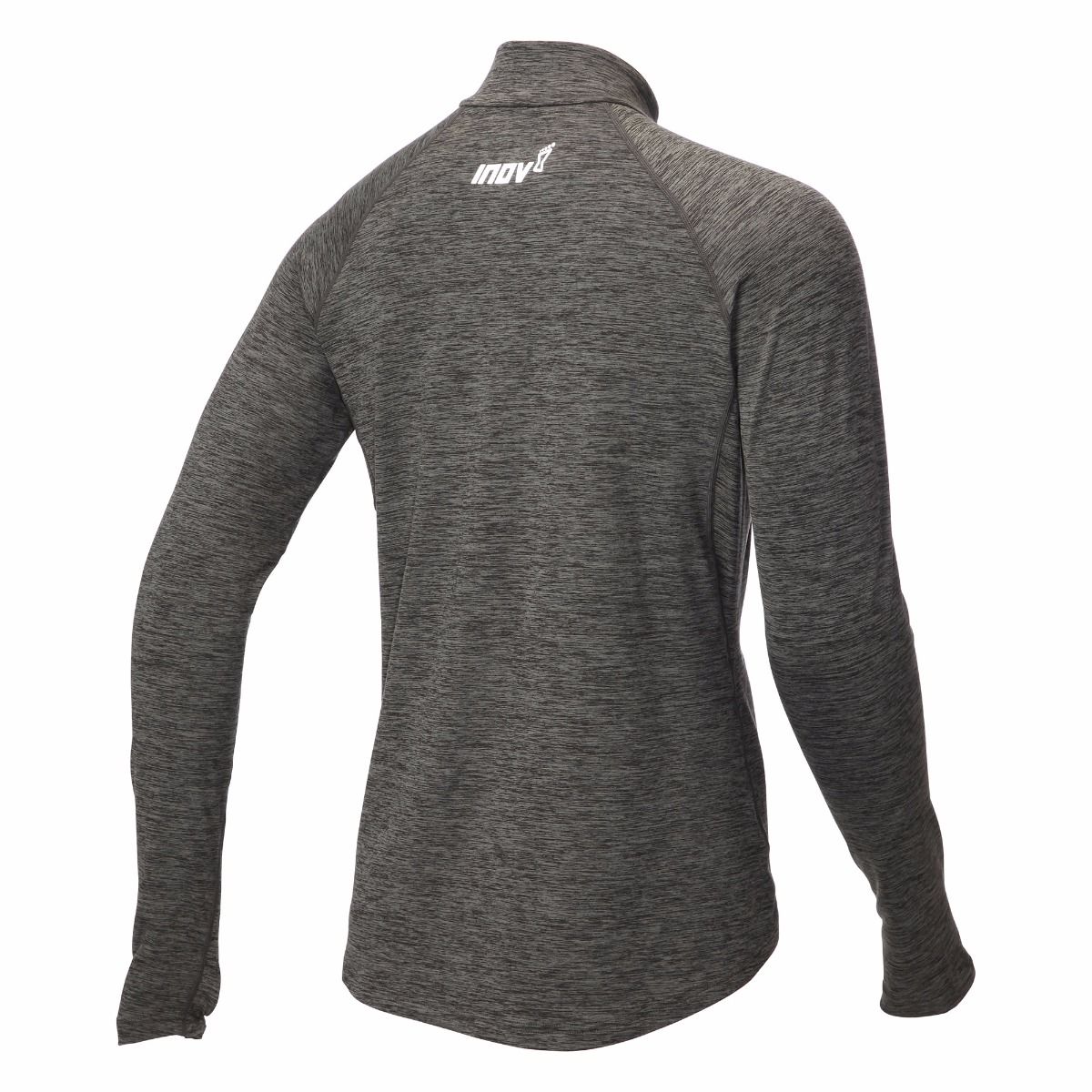 Once summited, Cut Gate offers a very rapid descent to an area called 'Slippery Stones'.  Low level and offering relative shelter from the grimness up top.  As I was able to finally pick up some speed and run consistently for a spell, I was able to evaluate the shirt.

1)  It was definitely comfortable on.  No itching when sweaty, no chafe, no riding or rubbing.

2)  It was regulating my temperature a treat, while dry, then soaked, re-soaked with cold water and a dose of sidewinds.

3)  Now I was working at speed, it still allowed me ease of movement and freedom, thanks to the elastic quality of the fabric.

4)  The half zip was proving valuable, as i'd drawn it up to near my neck while exposed and running into the wind/rain, but here on the lower ground, with less wind chill, I could vent by pulling it dn and getting rid of all that built up humidity.

5)  The thumb loops built into the sleeves were keeping the cuffs over my gloves and removing any chance of a cold draught up my wrists/arms, so cosey as a pig in a blanket.

6)  Despite the fact I had full waterproof cover in my vest pack and the weather hadn't let up for a second, I was in no way tempted to alter my oufit in the slightest.

This had been the ideal choice.

The inov-8 AT/C LONG SLEEVE HALF ZIPPED MID LAYER, for £55 offers plenty of versatility, if like me you like to run without feeling swamped in too many layers and end up claustrophobic for being over dressed.

It feels very warm when used (correctly) as a Mid Layer, with plenty of wicking action, but remaining lightweight and stretchy enough to not impare movement.  It prevented me from getting cold, but didn't make me hot, so I was able to complete 14 miles of trail without more than an electrolyte sweet and a mouthful of orange squash at the midway checkpoint.

I've definitely made the mistake of losing too much fluid via perspiration in the past, but the effect from wearing the at/c long sleeve seemed to be a perfect balance between protection and breathability.

While worn alone in temperatures close to freezing, during exercise, it maintains a fair level of insulation and provides some nice built in features, such as the half zip and thumb loops.

I suspect that once wet through, it takes a little longer than some tops to really dry itself out, but in the constant deluge I experienced, this was left to my imagination and in any case, I was warm while wet, so no big deal.

For a comfortable, multi-use top which feels warm while stood waiting to go, comfy even when soaked and effective during multi-terrain running at a pace, I would strongly recommend the AT/C LONG SLEEVE HALF ZIPPED MID LAYER for almost anything between Late October and Mid April, with option to go with this one item alone, or over a dedicated base layer for insulation against deeply cold conditions.

Not to mention, if I had put on the shell, I'd have been in danger of overheating.  A very pleasant 5/5 from inov-8.