On Running say that the CloudFlow "Is for runners looking for a lightweight and very responsive performance shoe".  So let's go take a look and more importantly a run or two...

Straight out of the box, yes these are clearly pretty light. 220grams for a men's UK 8, so for women a mere 190grams for a UK 5. Almost racer terriotary by today's standards. Light they are yet flimsy they are not.  So onto your feet they feel pretty good. There is a nice wrap to the upper, they feel secure and the fit around the heel is about where I reckon it should be. That said, don't expect these to feel super plush in comparison to some other shoes you could be looking at. Yes, the upper is stripped back with what On Running say is an 'Adaptive, engineered mesh using the latest weave-technology to blend breathability with support'. OK, so once on I would pretty much go with that. This is where miuch of the weight saving has come from and yet the upper still feels pretty robust yet comfortable. Lacing is secure, the tongue definitely off a racing shoe with little or no padding. Then the advantage to there is that it won't soak up copius amounts of sweat and water.

The thing with ON Running Shoes is the cushioning system. It does look a little odd. The hose pipes, or to give them their coreect name, the 'Clouds' provide the cushioning. There is 18 of them individually positioned to optimise both cushioning and propulsion. Think about it, it may just work.
You land, the 'Clouds' crush onto themselves. They are made of lightweight EVA too, so that also spreads and dispitates the shock. The key here is that as you move into the propulsion phase they stay in position and as you push you lose less energy into the midsole and therefore more force is used to move you forward. Also, known as 'Responsiveness'. Adding to the faster-feeling approach is the heel to forefoot drop - 6mm. Seen by many as a sweet spot.

The outsole is pretty much what you would expect from this type of shoe. Solid enough, yet in no way is it there to take a battering. If you are heavy on the outsole, then this may not be something you would use as an everyday trainer. Faster paced training yes, racing yes. 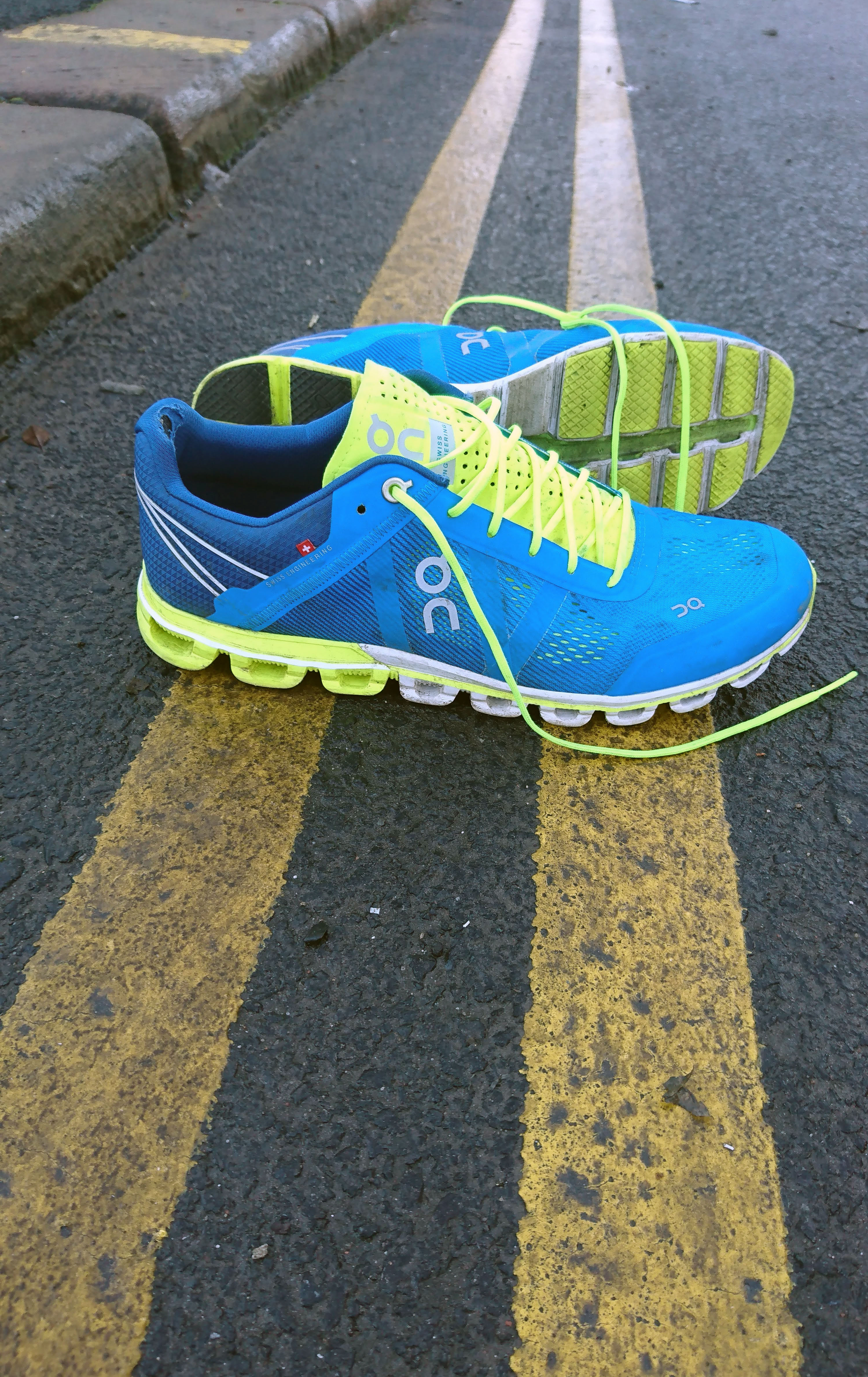 'ON' Test!
Yikes, what's not to like! OK, I like a lower drop shoe. I like a respoinsive and I really hate anything with soft and over indulged cushioning. That said, I am never so keen on minimalist, so the racer trainer area often hits the spot for me. Certainly in my younger days it was always the Nike Skylon (V1) not the later Bowerrman range reincarnation (Boy did they spoil that shoe!).
Straight on, straight out the door. This shoe simply does exactly what On Running Say it will do. Racer trainer, well yes. Actually, for some there is no reason why it can not be an everyday trainer - you would just have to watch the sole wear, especially if you tend to hit the heel hard. Cushioned, definitely, responsive, even more so. That cushioning and responsiveness blend really hit the sweet spot for me.
The upper was also pretty much spot on and it was noticeably breathable. I have one gripe, a small matter of a little more width would have been nice - what's a few grams worth amongst friends for a slighht improvement to the fit?

Yet on the whole, the CloudFlow feels light, responsive yet cushioned, exactly as claimed. So yes, I can see why these have become my gop to shoe for the road. Well worth a try.