Saucony have been gathering many followers for their highly regarded Peregrine trail shoe.  Now in its seventh incarnation the Peregrine continues to receive favourable reviews and an even stronger following. Here at the store it is one of most demanded and “I’d like another pair of these”, shoes we have stocked.
Kinda says something.

The Koa TR is a different animal altogether. On the face of it does look much more of a shoe and certainly has a much less aggressive grip. You pick it up and the Koa TR feels more substantial too, weighing in at around 290 grams for the men’s option.
So have the designers made a right mess of the shoe or does it actually offer something more?  Only one way to find out… go give them a run or two.

OK, let’s get some of the other stuff out of the way.  If you ‘blow’ the midsole full of air during manufacturing it is both lighter and also detrimentally more unstable as the foot rolls through the landing to toe-off cycle.  This also decreases the life expectancy of the midsole so manufactures tend to make the midsole more ‘over-sized’. Somewhere, in-between all of this lies balance. So how about a midsole at the lower end of ‘oversized’ and one that offers a firmer yet more responsive (springy if you like) ride.  In steps the Koa TR.  Add in a top layer of Everun cushioning (under the sockliner and above the layer of glue between upper and midsole) and we have the Koa’s cushioning and protection system.

The grip is designed for road through to hardpacked trails, handling some wet and mud.  Most wet rock conditions should also be handled pretty well.

Testing 1-2-3…
So out into the Sheffield parks we go.  Rivelin and Loxley both offer some pretty diverse underfoot conditions.  From hardpacked, cobbles, woodland, steep sided slopes and some open areas too. You can also pretty much guarantee to find some wet areas along the valley floor most times of the year.

OK straight out the box the toe shaped (oblique) fit is for me very much appreciated. I really like my forefoot to be able to do its thing.  I did pretty quickly remove the Everun top sole, I just didn’t like it. I appreciated the fact this also gave my ‘plates of meat’ a little more room. So there’s an option to think about if you like shoe volume.
The upper just wrapped my arch and heel, movement even whilst on the run felt minimal. So all good with the fit and comfort.
OK, onto the tracks and local trails. Within a few minutes I felt like I could happily buzz along in the Koa. Responsive, definitely with a fast feel and not feeling anywhere near their advertised weight. The cushioning is top notch yet I still had pretty reasonable ground feel, something I had thought would be sacrificed. I was surprised here and pleased at the same time.

So, to the grip. Yes!  It works. The trails were mostly dry, although through the woodland areas we did find enough 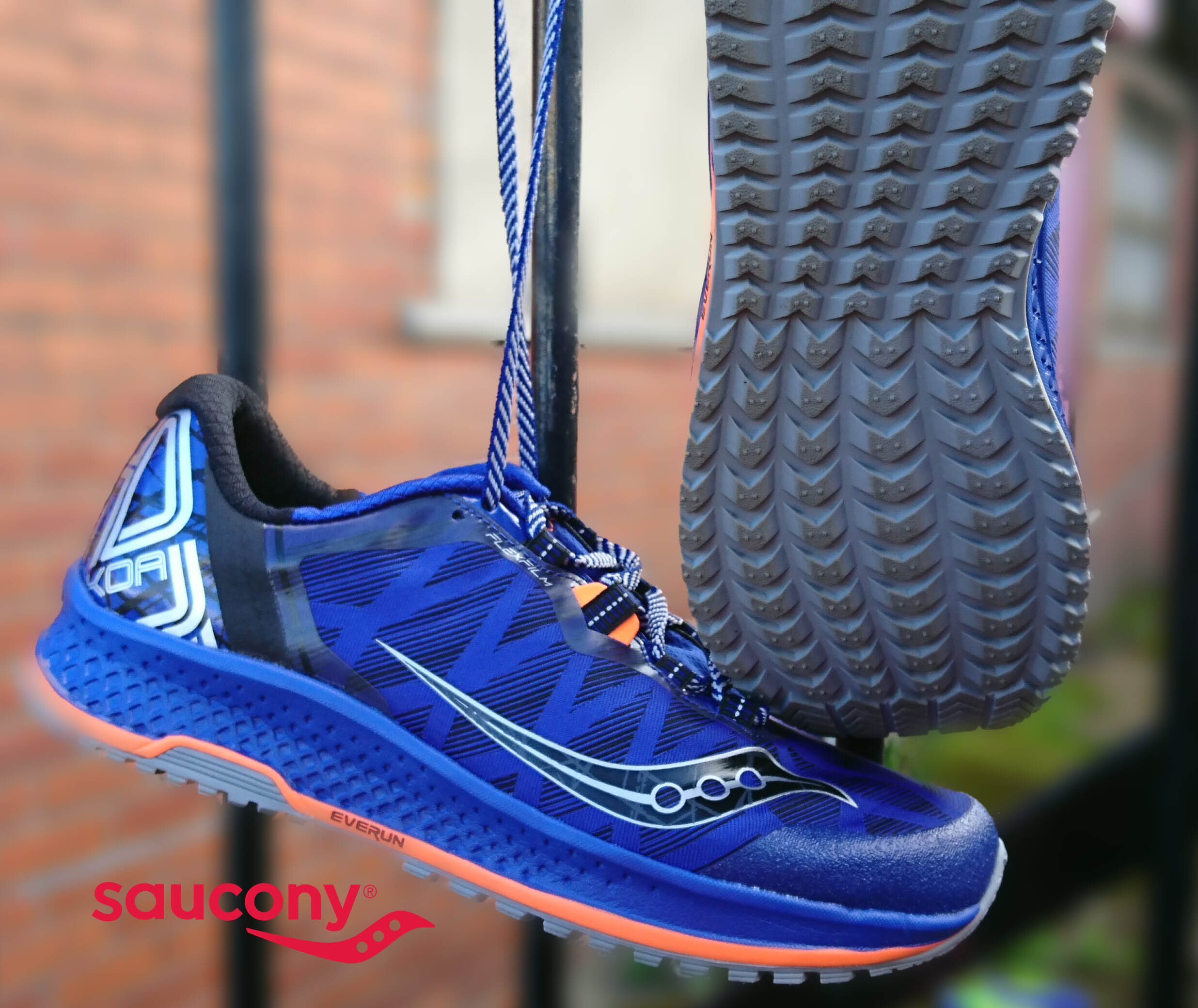 mud to ensure the Koa’s no longer looked all new and shiny. The Koa grip handled pretty much everything. A run up a loose surfaced track and the shoe did pretty well, gripping on all but the worst of the ‘loose’. That oblique toe box giving ample surface contact. For the same reason there was only minimal and very occasional slip in firm muddy sections. Over stone steps, up a steeper woodland section and then down through a field I am moving OK and have almost forgotten that I am out to test a new shoe. Then a more technical section approaches where I have to dance through and over the rocks. Again, it just happened, I didn’t have to think about the shoe, I just got on with ensuring I didn’t take a trip.
Then there’s that midsole again… it’s stable, absorbs shock yet is firm enough to ensure a positive push through into the next stride.
Out in the Peak District, my initial reactions remain. I would just add that they are nimbler than I would expect with good flexibility, and easy to plant over more technical ground.

Comfy armchairs were my first thought. Yes, but actually a whole trail shoe more than that. Not just for trail runners, I can see this becoming a ‘go-to’ shoe for ultra runners. It really is more than the sum of its parts with superb versatility, levels of comfort, grip and protection.

I highly recommend that you give the Koa a try if you are looking for a new Ultra shoe, a comfy easy going cushioned shoe or even something to pick up the pace in on a wide range of firmer trail surfaces. The Koa TR just works.
I do not say this so often, yet this may just be the best New shoe I have tried this year, just maybe.

The Saucony Koa TR can be found here: Men's and Women's

The Koa TR also has a sibling in the Koa ST which is designed for soft muddy trails and is part of the four-shoe Saucony Run Anywhere range, all of which are available online and instore.