The difference between the two and which running shoes use which and why.

GRIP - By Friction, the ability to cling onto a surface.

TRACTION - The ability to pull or draw something along. 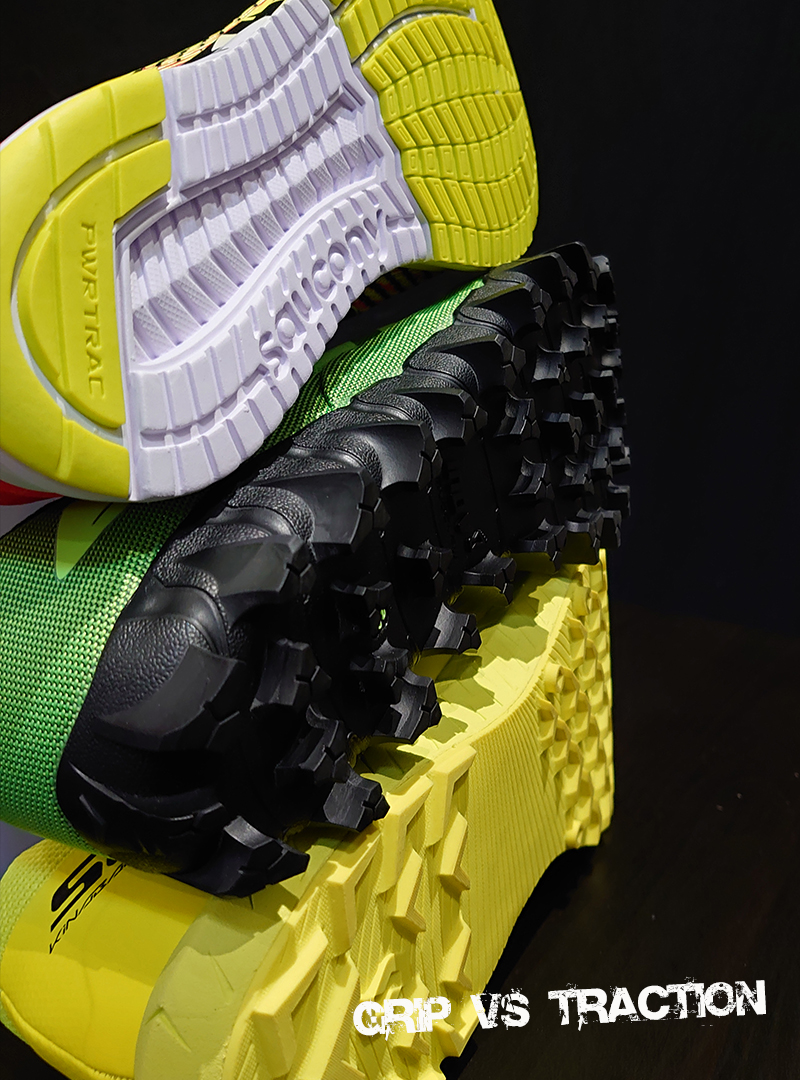 In essence GRIP is just the ability to cling to stuff.

While TRACTION is the resistance against sliding, when being pulled at (usually while under load).

Grip works when materials are able to stick on mere contact alone, but Traction adds the ability to pull against something and have it stay fixed in place when the Grip might otherwise fail.

And so where running shoes are concerned -

There are sticky rubber outsoles.  And there are harder, more plastic outsoles.

The softer, stickier stuff clings a lot more on contact with the ground, but suffers a lot more wear for being so soft.

The harder/tougher ones take a lot more abuse, but will perhaps fail to cling in wet or uneven areas.

When it comes to off-road running, the ability to stick is still very useful, but it's more important to keep your feet where you put them (to not have them slide in any direction), so you need some texture under foot, which will allow the shoes to grab into the surface and hold when pulled against.

Sticky rubber pulled across wet grass still tends to slip and slide.  But teeth along the underside of the shoes mean they'll sink into the mud, gravel, grass, sand, etc and stay in place when you push off.  This is traction in action.

A lot of road shoes have an almost entirely flat underside, allowing maximum contact across the surface of the shoe, for maximum friction -  enhanced by soft sticky rubber when required.  But these same shoes, even with sticky rubber here or there, will slide when used on wet or lose gravelly areas.

Above: inov-8 Road Talon 240 shoes with strategically placed rubber pads, for grip where the foot ought to make brief contact

So smooth for hard flat surfaces... Toothy for anything else.

There are plenty of shoes which offer a low, flat stud for road and easy trails.  There are some which feature much longer, narrower studs, which compromise friction on the flat, in favour of grabbing into softer ground.

Knowing where you're going to run most of the time and what kind of footwear might suit, makes a huge difference when attempting to move successfully over any particular area.

Depth of cushion is for comfort.  It's protective against impact.  But it won't make you a better runner and it won't stop you slipping when you push uphill, or on the flat.  Nor will it save you from a fall, if you commit to a downhill without sufficient purchase under foot.

Grip then, comes from materials and their nature.  How 'sticky' they are when placed on a variety of surfaces.

Traction comes from the design and arrangement of the teeth.  All teeth facing the same way for forwards movement.  In all directions for all-round traction over uneven ground.  Reversed studs at the heel for traction on downhills.  There are plenty of shoes with a mixture of directional studs, for use on hard and soft ground combined.

A few shoes feature such things as metal tips for use on wet mossy rocks, tree roots, fallen limbs or perhaps ice on occasion.  Some have glass fibres in flat studs for use on ice alone.

Some try to cater for a bit of everything, but by their nature, fail to excel in any particular area, when measured against a dedicated shoe which is more niche, but more fit for purpose.

Grip versus Traction is a never ending battle.  Which is why companies produce such a range of shoes.

It's also why the staff at Accelerate and the runners we support, own what we refer to as a 'tool box of shoes'.  Since we almost always know what we'll need on any given run and the footwear that might best provide it.

Grippy shoes with plenty of traction include:  inov-8 Mudclaw 300, which has one of the stickier, grippier rubber outsoles, but also a conical stud which sheds mud more easily to maintain the traction when the mud threatens to fill up the gaps.

Above: the inov-8 Mudclaw 300 with its sticky, yet deep conical studs for combined traction and grip

inov-8 X-Talon 212/230/200, which is still very sticky, but with narrower studs, more distanced, so more effective against grass, which can cause broad studs to slide, despite their depth.

Scott Supertrac Ultra RC, which has a long narrow stud configuration, in zig zags with studs along the edges of the shoes to prevent the collaps that teeth alone can cause when they bend under load.  More friction for multi terrain including road and flagstones, but again, less effective when used in mud and grass.

Saucony Peregrine, which offers a 50/50 split between studs and gaps under foot, but with the addition of a deep midsole which provide a road shoe comfort on hard trails and tarmac.

There really isn't a shoe which rlies entirely on grip.  And there's little gain in having a shoe with traction if it slides off everything remotely firm that it comes into contact with.

Steep terrain demands that you be able to attach yourself to the rocks and roots, the grass and mud and everything else that poses a risk as you hurtle downhill at speed.  So less spike, more stud, with grippier materials which will momentarily allow you to put your foot down and trust it as you focus on where to place the other.

Road shoes require more friction, with almost all of the shoe against the floor for maximum traction, so long as it's made from something which grips all the same.

For a full description of how different stud arrangements can provide traction on a variety of surfaces, read my previous guide here