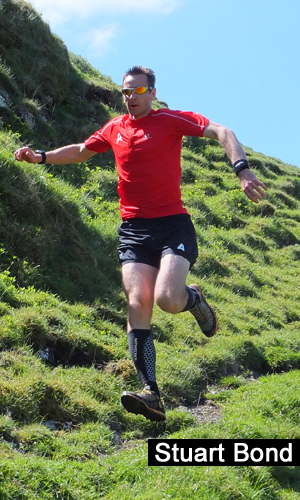 The names Bond, Stuart Bond “Licence to Run”. I began my assignment to run at the age of 11. The pinnacle of my athletic career coming in 1991 as a 14 year old. I ran undefeated in 35 track races. During that time I  managed to win the English schools U15’S 1500mts title in front of 10,000 spectators. I then went on to to win the inaugural AAA’s 1500mts & 3000mts titles respectively. I also represented England as a school boy on 3 occasions and I am currently  still ranked in the top ten of all-time for the U15’s 3000mts with a time of 8:56.4. The record being held by a certain Mo Farah with a time of 8:47.

I am currently an England Athletics/Run Together Fell Running Group Leader.

I have had the honour (and joy) of representing England as an International Mountain Runner in my ten years as a Fell Runner, along with competing on a regular basis for one of the Peak District’s best clubs, Dark Peak Fell Runners. During my career with Dark Peak, I have won many races locally with a few course records to boot!

I have also enjoyed many successes nationally with Dark Peak including two English Fell Running Championship Gold medals and two British Fell & Hill Championship Gold Medals under the guidance of head coach Stuart Hale. I have been a Team Accelerate UK Ambassador for around seven years now, often out on the road with Stuart Hale, giving talks (on training methods and schedules) to clubs within the local fell running community.

I have been fortunate enough to have been given the opportunity to help with articles for Trail Running Magazine*.

My claim to fame – that I was the one to teach Pippa Middleton the art of Fell Running, in the Peaks for one of the November 2016 editions of Waitrose Weekend Magazine.

As an athlete and a fast V40 I aim to raise the bar!  My athletic ethos is simple “Success is Proportionate to Effort”. Through group leadership (and eventual coaching) I want to use my knowledge and experiences to help runners of all ages/abilities to realise their true potential and to experience the same joys that I get from fell running.  It’s one of the country’s last true great amateur sports.